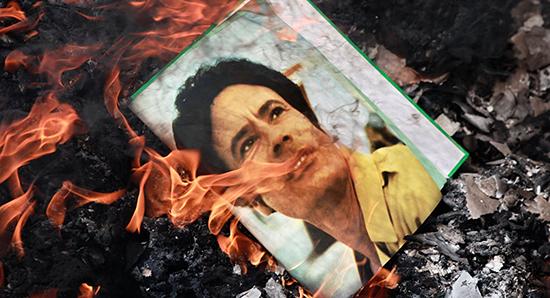 The development comes as the situation in crisis-torn Venezuela reached the boiling point over the weekend when trucks laden with US humanitarian aid on the Colombian and Brazilian borders repeatedly tried to push past lines of troops loyal to President Nicolas Maduro.

US Senator Marco Rubio has tweeted two photos of late Libyan leader Muammar Gaddafi – one showing him alive and well and still at the helm of the country, while the other featured his bloodied face as he was being brutally tortured before his murder.

The tweet was largely perceived as an unequivocal message to Venezuela’s embattled President Nicolas Maduro as the United States continues refusing to rule out a military option in the Latin American country.

Rubio’s post came amid reports that US Vice President Mike Pence is to announce “concrete steps” and “clear actions” to address the situation in Venezuela during a meeting with regional leaders in Bogota, Colombia on Monday.

According to Reuters, citing a senior US official, the announcement will be made after Pence meets Venezuelan opposition leader Juan Guaido. The source, however, declined to go into detail about what the new measures would entail.

“What happened yesterday is not going to deter us from getting humanitarian aid into Venezuela. The vice president will announce concrete steps. You should expect him to announce clear actions tomorrow as he speaks to the Lima Group”.

Pompeo: Every Option is on the Table

In a parallel development, US Secretary of State Mike Pompeo said on Sunday that Washington would continue to pressure Venezuelan President Nicolas Maduro until he understands that his days are “numbered”.

He told “Fox News Sunday” and CNN’s “State of the Union” that the administration would continue to support Guaido, and refused to rule out a military option.

“There’s more sanctions to be had, there’s more humanitarian assistance, I think, that we can provide. I think we’ll find other ways to make sure that food gets to the people who need it, and we will. Every option is on the table… We’re going to do the things that need to be done to make sure… that democracy reigns and that there’s a brighter future for the people of Venezuela”, Pompeo said.

Over the weekend, two convoys with US humanitarian relief from Brazil and Colombia attempted to cross into Venezuela, but were stopped by security forces, loyal to President Maduro. He has strongly opposed the deliveries, viewing them as a pretext for foreign intervention, and ordered the closure of the country’s borders.

The Venezuelan president stressed that the country was able to cope with its hardships and that US “concerns” over the humanitarian crisis had been “fabricated by Washington over the last four years to justify intervening in our country”.

In addition to closing the border with Brazil and three bridges connecting Colombia and Venezuela, the country’s Vice President Delcy Rodriguez said that Caracas would also shut the border with neighbouring island nations and suspend air traffic.

The unrest saw 335 people being injured in clashes between police and protesters on Venezuela’s borders with Colombia and Brazil. Amid Saturday’s attempts to force unauthorised aid deliveries into Venezuela, Caracas broke diplomatic and political relations with Colombia, ordering diplomats to leave the country in 24 hours.

In a Saturday statement, Maduro made it clear that he was not going to back down, saying that he “is governing Venezuela and will continue governing it”.

“I am steady as never before, firm like this tree, governing this country now and within many [upcoming] years”, Maduro said, adding that Caracas would not allow US aid into the country.

The situation in crisis-hit Venezuela spiralled downward in mid-January when Guaido, the head of the opposition-led National Assembly, declared himself the country’s interim president, challenging last May’s re-election of Maduro.

The move was immediately recognised by the United States, its allies in the region and beyond, while Russia, China, Mexico, among other nations, voiced their full support for Maduro. President Maduro, for his part, has accused Washington of staging a coup and severed diplomatic ties with the US.