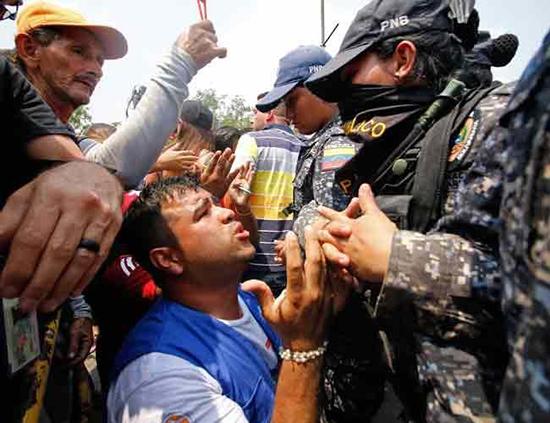 A U.S.-backed drive to deliver foreign aid to Venezuela met strong resistance as troops loyal to President Nicolas Maduro blocked the convoys at the border and fired tear gas on protesters in clashes that left two people dead and some 300 injured.

As night fell on Feb. 23, opposition leader Juan Guaido refrained from asking supporters to continue risking their lives trying to break through the government’s barricades at the Colombian and Brazilian borders. Instead, he said he would meet U.S. Vice President Mike Pence on Feb. 25 in Bogota at an emergency meeting of mostly conservative Latin American governments to discuss Venezuela‘s crisis.

But he did make one last appeal to troops to let the aid in and urged the international community to keep “all options open” in the fight to oust Maduro given the violence on Feb. 23.

“How many of you national guardsmen have a sick mother? How many have kids in school without food,” he said, standing alongside a warehouse in the Colombian city of Cucuta where 600 tons of mostly U.S.-supplied boxes of food and medicine have been stockpiled. “You don’t owe any obedience to a sadist…who celebrates the denial of humanitarian aid the country needs.”

Earlier, Maduro, who considers the aid part of a coup plot and has refused to let it in, struck a defiant tone, breaking diplomatic relations with Colombia, accusing its “fascist” government of serving as a staging ground for a U.S.-led effort to oust him from power and possibly a military invasion.

“My patience has run out,” Maduro said, speaking at a rally of red-shirted supporters in Caracas and giving Colombian diplomats 24 hours to leave the country.

Throughout the turbulent day on Feb. 23, as police and protesters squared off on two bridges connecting Venezuela to Colombia, Guaido made repeated calls for the military to join him in the fight against Maduro‘s “dictatorship.” Colombian authorities said more than 60 soldiers answered his call, deserting their posts in often-gripping fashion, though most were lower in rank and didn’t appear to dent the higher command’s continued loyalty to Maduro‘s socialist government.

In one dramatic high point, a group of activists led by exiled lawmakers managed to escort three flatbed trucks of aid past the halfway point into Venezuela when they were repelled by security forces. In a flash the cargo caught fire, with some eyewitnesses claiming the National Guardsmen doused a tarp covering the boxes with gas before setting it on fire. As a black cloud rose above, the activists – protecting their faces from the fumes with vinegar-soaked cloths – unloaded the boxes by hand in a human chain stretching back to the Colombian side of the bridge.

“They burned the aid and fired on their own people,” said 39-year-old David Hernandez, who was hit in the forehead with a tear gas canister that left a bloody wound and growing welt. “That’s the definition of dictatorship.”

For weeks, U.S. President Donald Trump’s administration and its regional allies have been amassing emergency food and medical supplies on three of Venezuela‘s borders with the aim of launching a “humanitarian avalanche.” It comes exactly one month after Guaido, in a direct challenge to Maduro‘s rule, declared himself interim president at an outdoor rally.

Even as the 35-year-old lawmaker has won the backing of more than 50 governments around the world, he’s so far been unable to cause a major rift inside the military – Maduro‘s last-remaining plank of support in a country ravaged by hyperinflation and widespread shortages.

On Feb. 23, U.S. Secretary of State Mike Pompeo called on Venezuelan security forces to “do the right thing” by allowing humanitarian assistance into the country.

Analysts warn that there may be no clear victor and humanitarian groups have criticized the opposition as using the aid as a political weapon.

International leaders including U.N. Secretary-General Antonio Guterres are appealing for the sides to avoid violence. But at least two people were killed and another 21 injured in the town of Santa Elena de Uairen, near the border with Brazil, according to local health officials.

Venezuelan soldiers clash with protesters along the border between Venezuela and Brazil in Pacaraima, Brazil on Feb. 23. (Ricardo Moraes / Reuters)