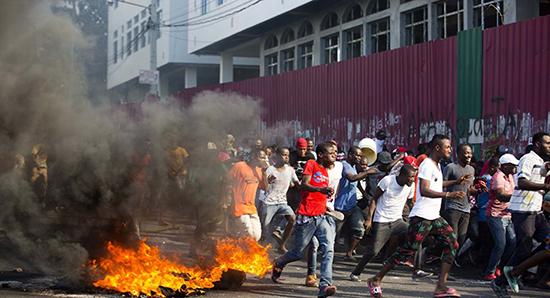 “We have detained several provocators … They were armed upon apprehension. They were shooting toward Venezuelan servicemen”, the source said.

The source added that the detained Colombians were already giving testimony. They have told the police forces about the location of weapon caches under the Simon Bolivar International Bridge at the Venezuelan-Colombian border.

“Yesterday was a hard day. There have been several clashes today. Colombian bandits fired gunshots at us. But yesterday we won”, a serviceman, who took part in the clashes, told Sputnik.

A Sputnik correspondent reported that the situation at the border had already stabilised after the clashes, but Venezuelan Army and police were on full alert, ready to repel new possible attacks by Colombia.

Three border bridges, via which the opposition attempted to force humanitarian cargo into the country, are currently blocked.

Three consular employees of the Colombian diplomatic mission together with their families left Venezuela on 24 February, crossing the border by foot, a Sputnik correspondent reported.

The Colombian diplomats, accompanied by Venezuelan police, crossed the border in the settlement of San Antonio.

Freddy Bernal, appointed by the central authorities as the so-called protector of the Tachira state, said that Colombia “forced” Venezuela to expel diplomats.

“The diplomatic personnel of Colombia were ordered to leave for Bogota. We regret that we were forced to make this decision, but the country cannot tolerate such aggression, so many lies, cannot tolerate that another country has become a military base for an invasion of Venezuela”, Bernal said.

According to the politician, Venezuela is the target of aggression and a coup plot led by the United States, with criminal gangs from Colombia being at the forefront of these efforts.

Amid the growing crisis around Venezuela-bound aid deliveries, the Colombian Defence Ministry, in a comment to Sputnik on 23 February, denied that US forces were moving across its country in the run-up to the deliveries.

The comment comes after Venezuelan President Nicolas Maduro severed diplomatic relations with Colombia, accusing the latter of using its territory for “attacks against Venezuela”, and ordered Colombian diplomats out in 24 hours. The decision came amid attempts of the Venezuelan opposition, led by self-proclaimed interim president Juan Guaido, to force US-sponsored humanitarian aid into the country, including through Colombia hosting an aid collection centre. Maduro refuses to allow in such aid, calling it a “fake show” and a ploy to oust him from power.

Before rupturing the diplomatic relations, Colombia had a functioning embassy in Caracas and 15 consulates in main Venezuelan cities.