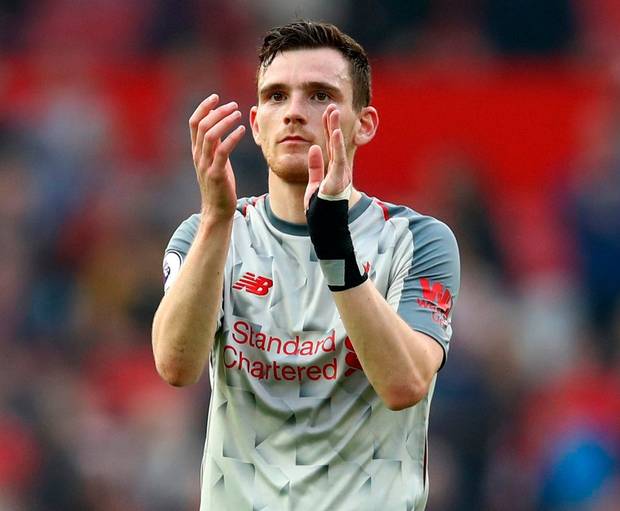 Andy Robertson has called for Liverpool to start “respecting themselves” after admitting that he and his team-mates lacked their usual spark against Manchester United.

While Roberto Firmino departed early with an ankle injury, Sadio Mane failed to register a shot and Mohamed Salah was shut out of the game before being substituted.

It was Liverpool’s second goalless stalemate in the space of a week following their Champions League meeting with Bayern Munich last week.

And like against Bayern, Liverpool failed to break down an opponent happy to sit deep, defend doggedly and threaten on the counter.

“It’s two top top-quality teams have done that to us in the last week – Bayern Munich and Man United. It doesn’t get much bigger than that,” Robertson said.

“I think something we’re struggling with is that we need to start respecting ourselves. These teams are showing us the respect and we need to use that as a positive.

“They’ve shown us the respect of sitting back and being a bit more defensive than they have been since the manager has taken over.

“We need to use that as a positive rather than a negative. It’s maybe something we need to work on.

“Last two games were 0-0 so it’s easy to say there’s a spark missing. Today, I can’t really remember any real chances, so of course there was a spark missing against United,” the full-back admitted.

“That’s why it’s hardest to win a Premier League instead of a Champions League because it’s over 38 games.

“You can’t play well in every game but it’s about grinding out results.” (© Daily Telegraph, London)