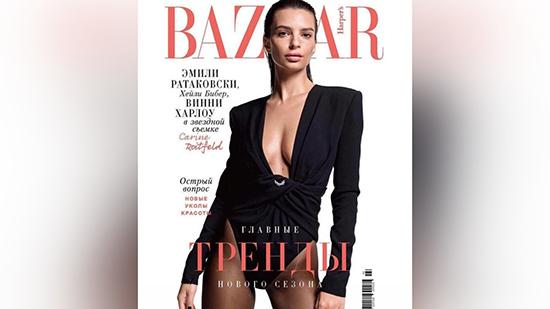 Top US model Emily Ratajkowski came close to causing an international scandal when she seemed to confuse Ukraine and Russia while promoting her Harper’s Bazaar cover, probably inflicting great pain on her Ukrainian fans.

“Harper’s Bazaar Russia and Harper’s Bazaar Japan! Thank you to the Carine Roitfeld and of course Mario Sorrenti for these international covers,” Ratajkowski said in an Instagram post that she fired off on Wednesday. The ‘Russian’ cover featured a photo of the American model in a revealing black tunic which diverted many users’ attention.

However, some eagle-eyed (and patriotic) netizens noticed that Ratajkowski’s photoshoot was actually done for Harper’s Ukraine edition, and the bombshell cover can be found on its Instagram account.

In a matter of hours, a swarm of apparent Ukrainians lined up to teach Ratajkowski a geography lesson. “Russia? Baby, it’s Harper’s Bazaar Ukraine,” one user noted.

“Ukraine isn’t part of Russia, Emily!” another said. A couple of Instagrammers then upped the ante, saying the model “is simply stupid.”

There was one user who chose to convey his angry message in his native language, and not at the model: “Are you a Ukrainian magazine if your publications are in Russian? Ratajkowski was right to add you to Russia.”

Users on other side of the border took Ratajkowski’s mistake more lightly.

“Does she know something that we don’t know?” a Russian user asked. “Did she look into the future and see Ukraine being Russian?”

“Well done Emily! True Ukrainians have always stood for ties between ordinary people! The rest are madmen or internet trolls,” another said.

Ukraine gained independence back in 1991 when it ceded from the Soviet Union. Relations between the two neighbors soured on the heels of the 2014 Crimean crisis and hostilities in eastern Ukraine. Nevertheless, Russian remains a widely spoken language not only in Kiev but also across the country.