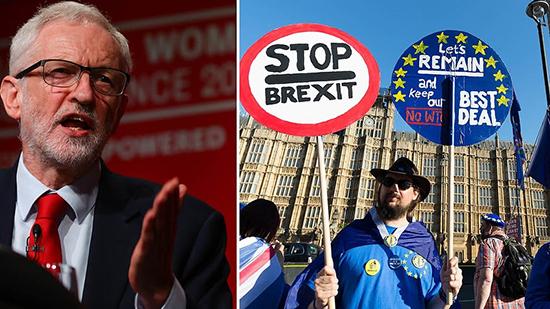 Labour says it is prepared to back another EU referendum to prevent a “damaging” Brexit.

Britain’s opposition Labour Party will back a call for a second referendum on Brexit, its leader Jeremy Corbyn will tell his lawmakers on Monday.

Parliament is due to debate and vote on Wednesday on the next steps in Britain’s tortuous departure from the European Union on Brexit, and lawmakers are expected to put down proposals, or amendments, including at least one that would demand that the exit deal is put to a public vote.

“We are committed to also putting forward or supporting an amendment in favour of a public vote to prevent a damaging Tory (Conservative) Brexit being forced on the country,” Corbyn will tell a meeting of his Labour lawmakers, according to extracts provided by his office.

The party will also support a bid by Labour MP Yvette Cooper to give parliament the legal power to force May to seek an extension to the Article 50 negotiating period beyond the exit date currently set down in law – March 29.

Corbyn has been under pressure for some time to support a second referendum. Last week, eight referendum-supporting lawmakers quit the party, in part owing to frustration over his failure to back another vote.

The prospect of holding a second vote poses a dilemma for Corbyn; while many of the party’s members and supporters fervently back a so-called People’s Vote, others simply want Britain to leave the EU as soon as possible.

A poll from YouGov this week found there was now a nine-point majority that believes leaving the EU was “wrong”.

Labour said it would also put forward an amendment calling on the government to adopt its Brexit proposals, including a permanent customs union with the EU and close alignment with the bloc’s single market.

It comes as the European Union opened the door to Britain postponing its exit from the bloc beyond the March 29 deadline.

European Council President Donald Tusk said he had discussed the “legal and procedural context of a potential extension” when he met Sunday with British Prime Minister Theresa May, on the sidelines of an EU-Arab summit in Egypt’s Sharm el-Sheikh.

“I believe in the situation we are in, an extension would be a rational solution but Prime Minister May still believes she’s able to avoid this scenario,” he told a closing summit press conference.

The EU has been watching with growing alarm the possibility that Britain will crash out of the bloc without a deal, risking chaos on both sides of the Channel.