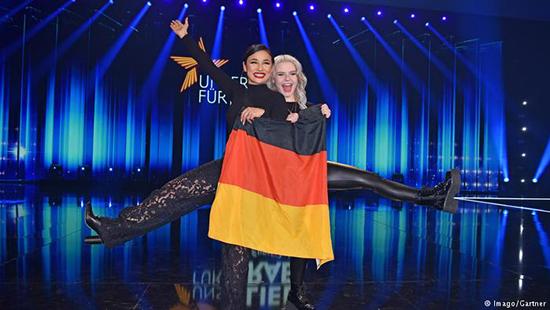 A duo called S!sters edged out competing acts at the Eurovision Song Contest preliminaries: Carlotta Truman and Laurita Spinelli will represent Germany in Tel Aviv in May. But who are the two singers?

The S!sters duo is made of two singers who aren’t actual sisters. Carlotta (19) and Laurita (26) came together just for this project. On a revolving stage, they vied in Germany’s national final on Friday with their English-language song, “Sister,” about two girls who find each other after a long quarrel. It starts with the lines “I’m tired / Tired of always losing,” which some commentators have already interpreted as a reference to the often very bad results of German Eurovision Song Contest (ESC) candidates.

S!sters outshined their very strong competitors and will be heading to Tel Aviv for the famous contest. Their powerful ballad was written especially for the event by a team of experienced composers: Laurell Barker, Marine Kaltenbacher, Tom Oehler and Thomas Stengaard. The latter had already co-written Michael Schulte’s song “You Let Me Walk Alone,” which made it to fourth place last year. A good sign?

Carlotta enjoyed being in the spotlight before she was even two years old. As a very young child, she loved music and flashy performances. At age eight, she sang in her mother’s children’s choir, developing her strong soul voice very early. At age nine, she impressed the German pop producer Dieter Bohlen on his TV casting show, Das Supertalent and as a twelve-year-old, won the German Pop & Rock award as best solo singer. Two years later, she once again made a strong impression on The Voice Kids, a youth TV casting show.

Now regularly on the road with her band Carlotta & The Truman Show, she gives living room concerts with her brother Amadeus. The North German singer likes rock, punk, pop and soul music and writes her own songs in English and German. Carlotta is currently the youngest student at the Music College in Hannover.

Laurita: the strong voice in the background
Laurita, half-Filipino and born in Wiesbaden, gained experience as a backing vocalist with German pop singers Sarah Connor and Stefanie Heinzmann. She currently works with Lena, the German who won the 2010 ESC. Laurita loves to sing together with others in a choir: “It’s simply a lot of fun, because two voices can create a perfect harmony,” she told German TV station NDR (North German Broadcasting).

Laurita’s role models are the greats of soul: Aretha Franklin, Stevie Wonder and Destiny’s Child. The artists who hire her as a background vocalist appreciate Laurita’s soulful, hoarse voice. The 26-year-old is currently composing and producing songs for her first album. Laurita also sings at weddings.

A long road ahead

The two newly-found sisters must now reorganize their plans for the near future — Carlotta was supposed to move houses, for example — as an extreme marathon awaits them. They will get to know the Eurovision universe, and their days will be filled with city trips, voice and performance training and interviews with the press. They will also travel to Israel before the event. The singers should get to know the country, said Thomas Schreiber, head of NDR entertainment; after all, a German act in Israel is a special thing, he pointed out.

It is hard to tell for now how good these two young women’s chances are. The German audience is already divided — many feel the song isn’t catchy enough. Unlike many in the field of competition, they are still quite unknown in their home country. Other countries like Russia or Finland usually send their superstars.

Vocal talent alone isn’t enough to prevail at the ESC; it also requires perfect charisma onstage, thick skin and authenticity. Last year’s German candidate Michael Schulte demonstrated that in Lisbon: He never let himself be distracted by critics and remained true to himself: a successful strategy.

Carlotta and Laurita now have two and a half months of training to achieve that, too. That’s a huge challenge for the singers and the team that will accompany them from now on.