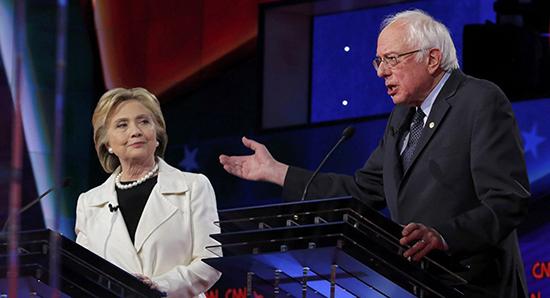 US Senator Bernie Sanders is said to have demanded to be flown in private jets after joining Hillary Clinton’s 2016 campaign trail following her Democratic Party nomination – something that has angered her aides.

“You can see why she’s one of the most disliked politicians in America. She’s not nice. Her people are not nice,” Michael Briggs, Sanders’ 2016 campaign spokesman, told Politico.

“[Sanders] busted his tail to fly all over the country to talk about why it made sense to elect Hillary Clinton and the thanks that [we] get is this kind of petty stupid sniping a couple years after the fact,” Briggs added.

“It doesn’t make me feel good to feel this way but they’re some of the biggest a**holes in American politics.”

Sanders, who had been the former secretary of state’s leading rival, formally endorsed her on 12 July 2016 and agreed to campaign for her in the Dems’ battle against Donald Trump.

The Clinton camp occasionally paid for private plane rides for surrogate campaigners, including Beyonce, Jay Z and Katy Perry, but according to the Politico story, Sanders was the only one who was granted this favour on a regular basis as the most important supporter.

However, he would request expensive charter flights instead of commercial ones, remarked Clinton’s campaign members.

One ex-Clinton staffer was quoted as saying that Sanders would only agree to fly somewhere “on a cushy private jet like a billionaire master of the universe”, although his former aides insist that private flights were the only way to keep up with the tight schedule.

Sanders, who announced a second presidential run last week, is a ‘frequent flyer’ when it comes to charter jets: he’s reportedly spent at least $342,000 on the flights since the 2016 campaign.

The Sanders and Clinton camps are also said to have clashed over who would speak at his pro-Clinton campaign rallies, with the senator reportedly wanting to see his supporters there and blocking those who endorsed Clinton.