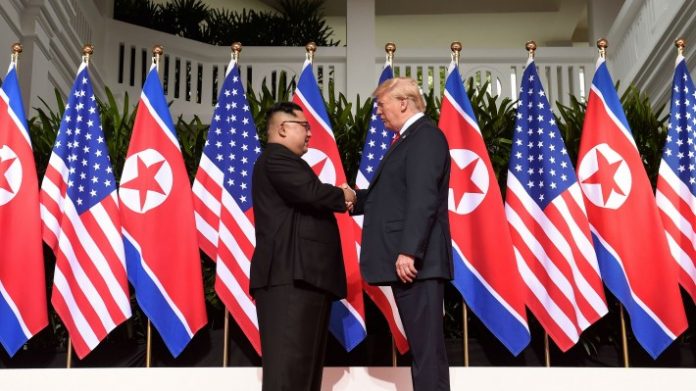 Kim should prove his intension of giving up nukes

U.S. President Donald Trump and North Korean leader Kim Jong-un will kick off their two-day second summit in Hanoi, Wednesday. But it is still uncertain if and how the two leaders can make real progress in nuclear disarmament talks. This explains why it is hard to shake off skepticism over Kim’s commitment to “complete denuclearization” at their historic summit in Singapore last June.

For this reason, it would be better not to have too high expectations for the Hanoi summit. President Trump is well aware that skepticism has persisted both in Washington and Seoul since the Kim regime has continued to drag its feet in delivering on his promise to abandon its nuclear arsenal. So he seems to caution against too high hopes for a big deal.

In this regard it can be inferred that Trump is taking a realistic approach. He said Sunday he was in no rush to strike a nuclear deal with Kim, adding he would be happy as long as the North maintains its pause on nuclear and missile testing. However, he did not miss a chance to strike an optimistic note by saying he and Kim had developed “a very, very good relationship.”

Therefore it is safe to say the Kim-Trump summit is more likely to end up in a “small deal” than a big one. Even if it were a small or limited deal, this should not necessarily be seen as a failure as long as the two leaders manage to narrow their differences and agree to meaningful and substantive steps toward the North’s denuclearization.

In this sense, it is important for Trump not to make the same mistake as he did in the Singapore summit by agreeing on too broad and too vague terms: the complete denuclearization of the Korean Peninsula. This time in the Vietnamese capital, Trump should focus on how to make a clear and concrete deal with Kim although such a deal fails to call for an immediate dismantlement of all nukes and ICBMs the North now possesses.

We have to admit it is unrealistic to achieve complete and verifiable denuclearization by a single stroke of the pen at the end of the summit. Nuclear negotiations are usually time-consuming and denuclearization is a far more complex and long-drawn-out process. Besides, it takes two to tango.

The success of the Hanoi summit will depend on how Trump and Kim can find a middle ground between their positions. So it would be better for the North to present a detailed denuclearization timetable and roadmap in return for the U.S. declaring a formal end to the Korean War and giving security guarantees for the Kim regime. The deal should be based on a give-and-take formula, not a unilateral imposition of undue demands. But it should be more than a freeze of weapons testing if the two leaders want to make a real success.

The North needs to agree on the dismantling of its Yongbyon nuclear complex and other plutonium and uranium enrichment facilities before it calls for sanctions relief. It also must allow international inspections and verification. The Trump administration needs to take a flexible attitude toward an easing of sanctions if the North takes genuine steps toward denuclearization.