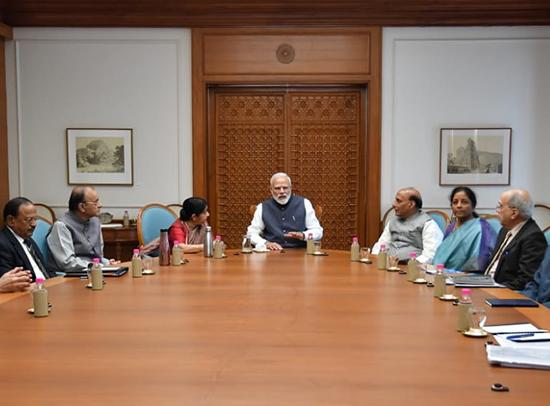 The Indian Air Force says it launched air strikes on terror camps and launch pads across the Line of Control in Pakistan-occupied Kashmir at 3.30am on Tuesday. Sources in the Indian Air Force said 1,000 kg bombs were dropped on Jaish bases across the LoC by multiple jets, including the IAF’s Mirage 2000. Earlier on Tuesday morning, Pakistan military spokesperson Major General Asif Ghafoor alleged that the IAF violated the Line of Control. Ghafoor tweeted that that the Indian aircrafts intruded into Pakistan from the Muzafarabad sector and dropped payloads in Balakot sector. However, he claimed that no casualties and damages were reported in the attack in Pakistan-occupied Kashmir.

Sources in the Union Home ministry have said that the BSF has been put on high alert along the International Border.

The administration and police have been put on high alert in Punjab near border areas.

200 to 300 terrorists killed in airstrike: Sources

As per an initial estimate, around 300 terrorists are believed to be killed in the airstrike, sources have said.

Air Force has made us proud: Arvind Kejriwal

While the government is yet to make an official announcement, Congress leader Randeep Singh Surjewala has congratulated the pilots of the Indian Air Force.

The Indian Air Force has put on high alert all air defence systems along the International Border and the Line of Control to respond to any possible action by Pakistan.

In wake of airstrike by the Indian Air Force, Prime Minister Narendra Modi is holding a meeting of the cabinet committee on security.

Intel sources have said that anticipating action by Indian forces after the terror attack in Pulwama, Jaish-e-Mohammed (JeM) leaders were moved to safer locations.

Congress president Rahul Gandhi lauded the pilots of the IAF after India said it had attacked terror bases in Pakistan.

Sources have said that the intelligence agencies had been monitoring as many as 13 launch pads for the last few days. These caps include the one destroyed by the Indian Air Force in Balakot.

Sources in the Indian Air Force have said that multiple fighter jets destroyed one of the headquarters of the Jaish-e-Mohammed (JeM) at Balakot.

Sources have said Army and Air Force officials are expected to brief the media about operational details.

Pakistan will respond but what shape will it take: Omar Abdullah

In the pre-dawn strike, Indian Air Force jets crossed the Line of Control and destroyed terrorist camps in, sources said. The airstrike took place at 3.30 am, the sources said.

As per sources in the Indian Air Force, three control rooms of Jaish were destroyed in Balakot, Chakoti and Muzzafarabad

Sources in the Indian Air Force have said multiple jets crossed the LoC during the night at 3.30 am.The IAF sources added that 10 Mirage 2000 dropped 1,000 kg bombs during the attempt to target and launch pads of terrorist group Jaish.

On Tuesday morning, Pakistan violated ceasefire at the Line of Control in Rajouri and Poonch districts. Pakistan’s claims have come in the wake of tense relations between the two countries after the terror attack in Jammu and Kashmir’s Pulwama.

Spokesperson for the Pakistan Armed Forces, Major General Asif Ghafoor, claimed that no damages were reported in the attack.

Pakistan’s claim have come at a time when tensions have worsened between India and Pakistan after the February 14 attack by Pakistan-based Jaish-e-Mohammad that killed at least 40 CRPF soldiers in Jammu and Kashmir’s Pulwama district.

On Monday, top Pakistan Army official had said that his country’s armed forces are “fully prepared” for a befitting response to “any Indian aggression or misadventure”.