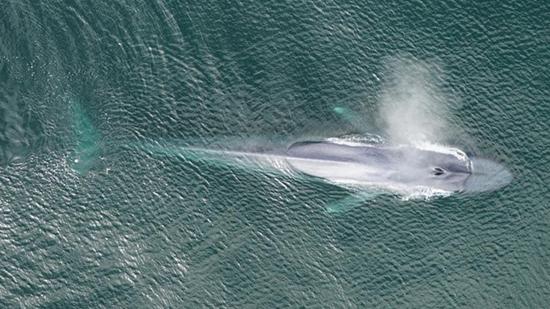 A clever new study shows that blue whales lean on their memory to guide their epic migrations.

Imagine trying to test the memory of the blue whale—the biggest animal that exists or has ever existed, a 190-ton behemoth that dwarfs even the largest dinosaur, a leviathan that is rarely seen except when it comes up for air and a minute part of its 110-foot-long body breaks the surface and slowly crests for what seems like an eternity. How would you subject such a creature to a psychological test?

You can’t, exactly. But there is another way to get a sense of how their minds work. For years, scientists have been fitting radio tags to these giants to track their whereabouts. By analyzing a decade’s worth of that data, Briana Abrahms from the National Oceanic and Atmospheric Administration has shown that these animals fine-tune the paths of their epic migrations to track the historical abundances of krill—the tiny crustaceans that they eat. Rather than finding where their prey currently is, they go after the places where their prey was in years past. Their migrations, in other words, are guided by memory. So what happens in a world where memory might lead them astray?

Countless species of animals migrate over long distances to exploit far-flung sources of sustenance, but these voyages aren’t just about getting to the final destination. The journey itself can be a sort of food tour, too. Migrating animals often adjust the pace and timing of their movements to hit pulses of seasonal food that spring up along their path. The ecologist Sandra van der Graaf described this as “surfing the green wave” after first observing it among barnacle geese. Others have found the same pattern among wasps, elk, mule deer, and brown bears, although since the latter are tracking salmon, they’re more accurately “riding the crimson tide.”

Whether these patterns map onto a supply of fish flesh or fresh foliage, the principle is the same: As waves of food sweep the world, waves of animals track them. At least, that’s what happens on land. No one had examined this phenomenon in the oceans before, until Abrahms and her colleague Ellen Aikens came up with a plan to study blue whales.
The blue whales of the North Pacific spend their winters in their breeding grounds off California and Costa Rica. Come spring, they swim up the coast of North America toward the food-rich summer waters of the Pacific Northwest. They could make the journey in two months (and they do, on the reverse trip back south). Instead, they take twice that time, pausing to gorge themselves on blooms of krill that appear along the way. It’s a leisurely season-long tour of a continent-wide buffet line.

Scientists can get a good sense of this changing buffet by measuring the concentrations of chlorophyll in different patches of ocean. This green pigment reflects the amount of plankton, which in turn is eaten by krill. The more chlorophyll there is, the more food a blue whale might find.

By comparing chlorophyll counts to whale movements, Abrahms and her team expected to see that “they follow the timing of their prey, as it becomes available,” she says. But they were surprised to learn that the animals very rarely tracked contemporary waves of krill. Instead, their movements were strongly correlated with 10-year historical averages of chlorophyll. Put it this way: You could predict a blue whale’s movements with far more accuracy by looking at where their food has been than where their food currently is.

In retrospect, the idea that whales would surf historical green waves “makes a lot of sense, given how dynamic the ocean is,” says Abrahms. “There’s so much variability year-to-year that the whales can hedge their bets by going with the average timing that they’ve experienced in the past.” Indeed, the team also found that the whales favor areas with unusually low year-to-year variation in chlorophyll counts.

“It’s striking that they return to the best and most consistent areas on average, rather than tracking current conditions,” says Chloe Bracis from the Senckenberg Biodiversity and Climate Research Centre. “This implies that they could be using memory to return to these locations.” It’s “a big step forward” to have that kind of data for a wild marine species, adds Sabrina Fossette from Swansea University, who would love to see similar studies in other marine mammals and sea turtles.

Understanding whales’ migration decisions is especially important given how quickly the world is changing. Nature’s schedule is becoming more erratic, and once-reliable timings are fluctuating beyond their normal variations. “The characteristics of the Anthropocene are very different from the past,” says Abrahms. Once, a blue whale’s memory might have sent it off course in a weird year, but what if every year is weird? “The concern is that if the whales get the timing too wrong, they’d miss their food,” Abrahms says. “We’re starting to see a lot of that in other species, with migratory birds arriving in their breeding grounds after the best food has come and gone.”

“Marine mammals are highly adaptable,” says Helen Bailey from the University of Maryland. But earlier work that she was involved in showed “that blue whales moved further up the U.S. coast during years when prey was less abundant, and had to search further for food. This new study confirms that they go to predictably good food locations first, and then make decisions about where to go next based on the current conditions.”

Some whales, like humpbacks, are flexible enough to switch from krill to fish if they can’t find enough prey. But blue whales are specialist hunters. Their existence depends on finding dense enough swarms of krill to swallow half a million calories in every mouthful. And that existence is already under threat. Blue whales are endangered, confined to a shrinking habitat rife with collision hazards, cacophonous underwater noises, and human-made pollutants that accumulate in their flesh. If, on top of all that, they can’t reliably find enough food, these memory-reliant creatures might become memories themselves.