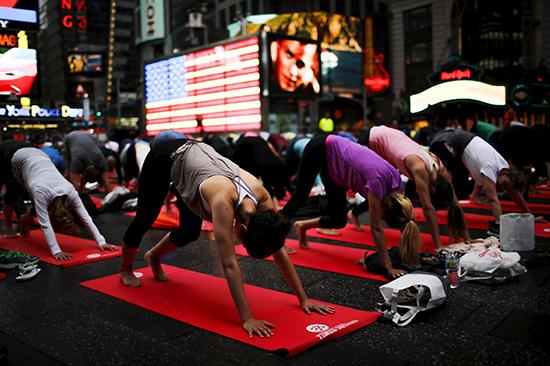 (Reuters Health) – Roughly half of U.S. adults suffer from sleep problems, and research suggests that many of them are practicing mind-body exercises like yoga and meditation that might help make it easier to get a good nights’ rest.

Mind-body medicine can include a range of health practices that combine efforts to focus the mind, control breathing and move the body in ways that promote relaxation. These practices are a key component of many forms of complementary and integrative medicine that previous studies have linked to improvements in sleep, researchers note in Sleep Medicine.

Yoga was most common, practiced by about 16 percent of the entire survey population, followed by spiritual meditation at 14 percent and mindfulness meditation at 8 percent.

“There are several things that people can do to help ease sleep problems, especially if they have a psychological basis,” said Sanford Nidich, director of the Center for Social and Emotional Health at the Maharishi University of Management Research Institute in Fairfield, Iowa.

One approach with a proven track record is what’s known as transcendental meditation, which has been shown to ease sleep disorders with a psychological component, Nidich, who wasn’t involved in the study, said by email. Transcendental meditation involves closing the eyes and thinking of a mantra to help conjure a state of restful alertness that can help people feel calm and less stressed.

“This can easily and effortlessly be practiced in one’s own home or office twice a day for twenty-minutes,” Nidich said.

Another approach is to get more exercise and to practice yoga daily, Nidich said. Previous research has linked both practices to improvements in sleep quantity and quality.

“Lastly, modifying one’s diet and eating the largest meal in the middle of the day when the digestive ‘fires’ are strongest rather than at night, based on traditional Ayurveda medicine, can have a profound effect on sleep quality,” Nidich advised.

In the study, people with sleep problems practiced an average of two different forms of mind-body medicine.

But less than 2 percent of the survey population practiced tai chi, which has also been shown to improve sleep, the study authors note.

People who used mind-body medicine were more likely to be under 30 years old, female, non-Hispanic white, living in the Western U.S., more highly educated and diagnosed with heart disease.

Overall, about 38 percent of the participants in the study had problems staying asleep and about 35 percent struggled to fall asleep.

About 5 percent of people with sleep problems reported getting four hours or less of rest each night, while 42 percent slept six hours or less.

The study wasn’t designed to determine whether specific practices like yoga or tai chi or meditation might be better suited to reducing insomnia or other sleep problems.

Researchers also lacked data on whether participants had been diagnosed with insomnia and whether people were practicing mind-body medicine in order to address sleep issues or for other reasons.

Study co-author Melanie Desiree Hoextermann of the University of Duisburg-Essen in Germany didn’t respond to requests for comment.