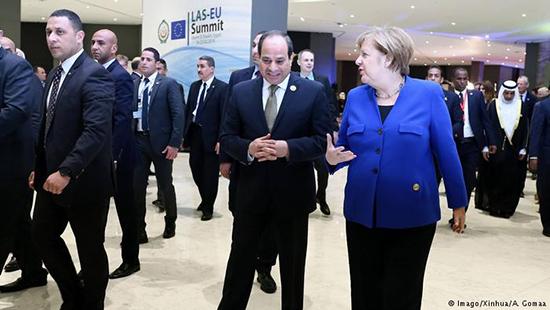 You can’t call the relationship between the European Union and the Arab League a true partnership at present. Their differences are too great and their interests too diverse, says DW’s Bernd Riegert in Sharm el-Sheikh.

Was the European Union-Arab League summit meeting all a big show, an exhibition with no content, a gathering of meaningless cliches and empty phrases? That’s how it appears at first glance, because there are no concrete resolutions to be found in the final document from the conference at the Egyptian Red Sea resort city of Sharm el-Sheikh — the first of its kind between the two international bodies.

But no one could really expect that there would be. In this initial period of getting to know each other, the main thing is to establish contacts and define a framework for future talks.

Nonetheless: The most urgent problems in Syria and Yemen, countries ravaged by war, were at least addressed. Suggestions were made as to how Libya might be stabilized. But it is not in the power of either the EU or the loose alliance of states that constitutes the Arab League to actually get something done. The interests of this illustrious group of kings, emirs, and other potentates and autocrats from Libya to Oman are simply too diverse. Not all the warring parties were at the table in Sharm el-Sheikh: Syria, Russia, Iran, the United States and Turkey are also needed in order to create a permanent solution to the ongoing conflicts in the Middle East.

This initial summit made no actual progress on the war in Syria. Familiar standpoints were reiterated. The EU’s overriding interest is to end to the conflict, in order to forestall further influxes of refugeesand make it possible for Syrians who have fled abroad to return to their homeland.

The North African countries, including summit host Egypt, made it clear that they don’t think much of the EU’s idea of detaining migrants from sub-Saharan Africa in North Africa long-term. This issue is not the only one to illustrate the fact that the EU and the Arab world are dependent on one another. German Chancellor Angela Merkel even went so far as to describe this cooperation as vital for the fate of the EU.

The major challenges arising from the respective regions’ different demographic development must also be addressed. The majority of people in the Arab states are younger than 25. They need economic prospects, education and jobs. The EU can and should offer to help with this, in order to mitigate the foreseeable pressure of migration from Arab countries to Europe.

The EU heads of state dutifully mentioned respect for human rights, but did not insist on it as a precondition for cooperation with some of their less democracy-friendly counterparts. Nonetheless, Egyptian President Abdel-Fattah el-Sissi — who governs his country with an iron fist — refused to countenance interference of any kind. His criticism of the restrained Europeans was unnecessary — but what else was to be expected of an autocrat keen to adorn himself with pleasant photos at the summit?

El-Sissi preferred to call for a joint approach in resolving the conflicts in the Middle East, which as far as his EU partners were concerned was effectively pushing at an open door. The signal being put out from Sharm el-Sheikh is that the EU and the Arab League support the “two-state solution” to the Israeli-Palestinian conflict. This signal is directed at Israel, the US and Iran; for various reasons, these countries either regard the two-state solution as obsolete or have never accepted it to begin with.

The bottom line, made clear by Donald Tusk, the president of the European Council, at this initial summit, was: We can’t choose our neighbors. Europe has to get along with the Arab countries south and east of the Mediterranean. It’s that or living in conflict with one’s neighbors, which nobody wants.

This is why the dialogue between the EU and Arab League states is set to continue at the highest level. Multilateralism must be implemented and practiced, said Germany’s Merkel, even if sometimes it is painful and progress is slow.