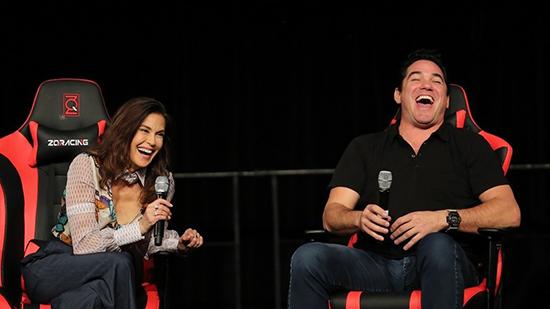 Responding to a site that advocated for a ‘person of color’ to be cast as Superman, actor Dean Cain – who is part Japanese – pointed out that this has been done before, when he played the Man of Steel in a 1990s TV show.

“Changing Superman’s skin color would be just another alternate take on the character,” Reuben Baron of Comic Book Resources (CBR) argued over the weekend, making a case for a non-white actor to be cast in the role.

“You’re about 25 years too late,” quipped Cain, referring to his role in ‘Lois & Clark: The New Adventures of Superman’ which premiered in 1994.

The TV series aired on ABC for four seasons, powered by the pairing of Cain and Teri Hatcher as Lois Lane. Both went on to have a acting careers in television, with Cain hosting ‘Ripley’s Believe It or Not!’ and Hatcher getting a star turn in ‘Desperate Housewives,’ among others.

Cain happens to have a very diverse background, including French Canadian, Irish, Welsh and Japanese, via his father Richard Tanaka.

Japanese. But I do speak Spanish…

After his tweet, CBR acknowledged they had unjustly ignored Cain’s role as Superman, but insisted that the purpose of the article was to argue how fans would react to “a person of color playing Superman today, not to suggest that it had not been done before, nor ignore the contributions to the character by any one actor on-screen.”

Cynics might suggest Cain was overlooked because he is a Christian and conservative, who sits on the board of the National Rifle Association and most recently took on a role of a detective in the movie about notorious illegal abortionist Kermit Gosnell.

Superman was created in the 1930s by comic book artists Jerry Siegel and Joe Shuster, as the only survivor from an alien planet, who crash-lands in Kansas and is raised to fight for “truth, justice and the American way,” as the old radio serials would put it.

There have been numerous film adaptations of the comic book hero, of which the 1978 version starring Christopher Reeve has been the most widely known. The most recent cinematic reboot was 2013’s ‘Man of Steel’, starring British actor Henry Cavill.