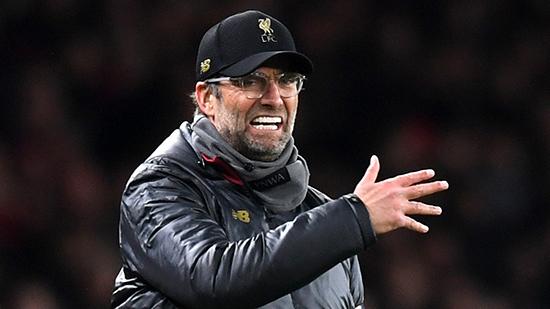 Jürgen Klopp has said this season’s title challenge is the first of many for Liverpool and his players deserve more credit for the form that has taken them top of the Premier League.

The manager believes his team’s recent performances have been unfairly compared with those of other title contenders, saying hopes are magnified by Anfield’s craving for a first league championship since 1990. “No plant grows as quick as expectations here,” said Klopp, whose side hold a one-point lead over Manchester City going into Wednesday’s home game against Watford.

Liverpool have drawn three of their last four league matches and Klopp himself expressed disappointment with Sunday’s stalemate at an injury-hit Manchester United. But title pursuits rarely run smooth, insisted Klopp, who believes the experience will benefit everyone at Anfield regardless of how the campaign finishes.

“Obviously a lot of Liverpool teams before us tried to be champion and it didn’t work out so it was always the manager or the team or other stuff like that,” Klopp said. “There is always a moment when, if we are not 25 points ahead, a season gets tricky. Always. Leicester had that. Chelsea had it. Only City last year didn’t really have it. Winning 5-0 against us with 10 men [when Sadio Mané was sent off at 1-0] changed the season for them. Apart from that it always happens.

“One generation has to break through, to make it happen, and then for the rest it will be easier. It would be nice if we could be that. The development of this team is unbelievable. Not that I praise myself or whatever, but it is unbelievable. We played three finals. I know in the world outside it looks like finals are nice, all perfect, then you don’t win and nobody thinks about it, but I don’t know a lot of teams that have been in three finals in the last three years. We improve constantly in the table.

“We are in a good moment. I cannot help if you don’t see it. We know about our responsibility and we go for it with all we have. This is not our last chance – that’s a very important thing. This is our first chance. There’s a massive difference. With the first chance, you jump in, then see if it works out. Sometimes it does, sometimes not. This will not be our last chance, 100% not.”

Klopp maintained he is “happy with a lot of moments” in this calendar year and the scrutiny placed on Liverpool is more intense than that on their title rivals. He added: “It’s like you get an eye problem when you have to watch our football now compared to when we played such wonderful football a few weeks ago. Sorry for that disappointment. It is the job to do.

“Do other teams perform constantly? They don’t. Sometimes they have the result but we don’t look at them in detail, we just see they are winning. You only have this obsessed look on our football. Yes, there were moments when I wish we would fly a bit more but you don’t fly because you want to fly. You fly because you work for it.

“I know I didn’t look like I enjoyed the second half at United but that’s how it is – it’s hard work. If the mood drops a little I understand it is my job to kick a few asses. Then after the game it’s over and we go again. Why is it such a problem for us to win 1-0? When we win 1-0 we have to explain why we don’t fly or score like last year. If we draw we have to explain why we don’t win 1-0. Something is always wrong and that is a bit of a problem, not for us internally, but that makes things not easy to enjoy sometimes.”

Jordan Henderson was on the receiving end of Klopp’s anger on Sunday for not shaking his manager’s hand when substituted. “It was a pure misunderstanding,” Klopp said.

Roberto Firmino has an outside chance of playing against Watford, despite leaving Old Trafford on crutches with an ankle injury. Scans revealed no serious damage and the striker has “a big chance” of facing Everton on Sunday, according to his manager.