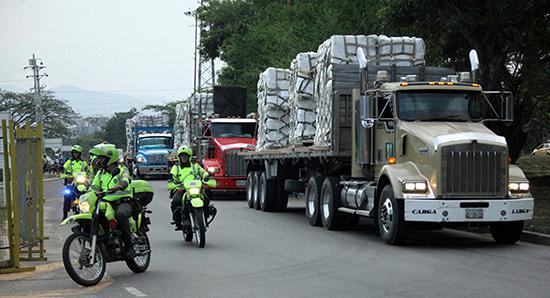 Earlier, Maduro warned that the US and its allies were using “the pretext of delivering humanitarian aid” to Venezuela in their attempt to “destroy the independence and sovereignty” of the Latin American country.

Speaking to foreign politicians in Caracas on Tuesday, Venezuelan President Nicolas Maduro showed them video clips which he claimed prove the “crimes” committed by the country’s opposition on 23 February.

The first video shows people with their faces covered with scarves throwing petrol bombs, also known as Molotov cocktails, at police, while in the second clip, equipment for making such bomb is seen.

The third video shows the burnt-out remains of a humanitarian aid truck, something that Maduro argued was the work of “the criminals of [Colombian President] Ivan Duque”.

In the video, the truck is shown to contain rebar, wire and nails, which Maduro claimed is proof that Colombia and the United States “were not pursuing humanitarian goals” when sending aid trucks to Venezuela.

We saw in the “humanitarian aid” containers something that confirms the claim that the “food and medicine” were accompanied by other things, a tweet by Telesur correspondent Madelein Garcia reads.

Maduro was echoed by Venezuelan Foreign Minister Jorge Arreaza, who told a UN Security Council meeting that the truck, which was torched on the border of Venezuela and Colombia on 23 February, contained not only food and medicine but also tools for the “radical opposition” to build up barricades.

According to him, the truck was set on fire with the help of a Molotov cocktail thrown by “those who were on the side of Colombia”.

Arreaza insisted that the Venezuelan armed forces used tear gas rather than lethal weapons in order to contain “aggression”, which he said “emanated from Colombia”.

He added that the majority of those injured in cross-border clashes were Venezuelan soldiers and police officers.

The remarks came after Maduro accused Colombia and the Venezuelan opposition of creating of what he described as special gangs that unsuccessfully attempted to ensure the delivery of humanitarian aid to Venezuela on 23 February, resulting in clashes with police on the country’s borders with Colombia and Brazil.

Maduro blamed the US and its allies for using “the pretext of delivering humanitarian aid” to try to “destroy the independence and sovereignty of the country”.

The Venezuelan President pledged that Caracas would not allow such aid into the country, saying that the country was coping with its difficulties and that US’ “concerns” over Venezuela’s humanitarian crisis were “fabricated by Washington over the last four years to justify intervening” in Venezuela.

Separately, Maduro also stated that Venezuela was cutting off diplomatic relations with Colombia and expelling all diplomats from its embassy.

The ongoing political standoff in Venezuela escalated on 23 January, when opposition leader and President of the National Assembly Juan Guaido declared himself the interim president of the Latin American country.

Shortly after the United States and its several allies recognised Guaido, Maduro responded by accusing Washington of trying to orchestrate a coup in his country. Russia, China, Cuba, Bolivia and a number of other states have reaffirmed their support for Maduro, who was elected in accordance with the nation’s constitution, as Venezuela’s only legitimate president.