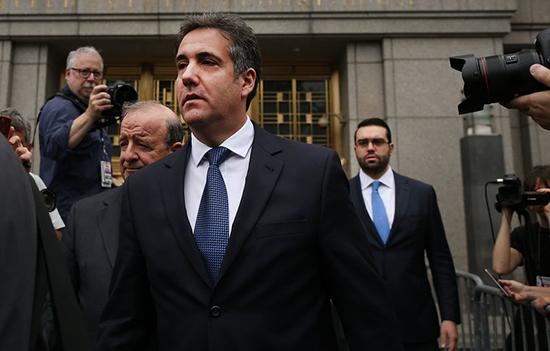 Michael Cohen is to accuse Donald Trump of being a “conman” and a “cheat” who had advanced knowledge that his longtime adviser was communicating with WikiLeaks during the 2016 campaign, according to opening testimony he will deliver to Congress on Wednesday.

Cohen’s prepared remarks, confirmed by the Guardian, include a series of explosive allegations that mark the first time Trump has directly been implicated in conspiring with WikiLeaks to influence the presidential election.

The president’s former lawyer, who will publicly testify before the House oversight committee on Wednesday, will state that Trump was informed by his associate Roger Stone that WikiLeaks would publish emails stolen from the Democratic National Committee and Hillary Clinton’s campaign.

“In July 2016, days before the Democratic convention, I was in Mr Trump’s office when his secretary announced that Roger Stone was on the phone. Mr Trump put Mr Stone on the speakerphone,” Cohen’s opening statement reads.

“Mr Stone told Mr Trump that he had just gotten off the phone with Julian Assange and that Mr Assange told Mr Stone that, within a couple of days, there would be a massive dump of emails that would damage Hillary Clinton’s campaign. Mr Trump responded by stating to the effect of ‘wouldn’t that be great.’”

The remarkable allegations by Cohen go further than what has been made public thus far by the special counsel investigation into potential collusion between the Trump campaign in Moscow.

Cohen will also suggest his instructions to lie to Congress about a possible Trump Tower deal in Moscow during the 2016 campaign came from the president – albeit not directly.

“In conversations we had during the campaign, at the same time I was actively negotiating in Russia for him, he would look me in the eye and tell me there’s no business in Russia and then go out and lie to the American people by saying the same thing,” Cohen will say. “In his way, he was telling me to lie.”

“Mr Trump did not directly tell me to lie to Congress. That’s not how he operates,” he will add.

Cohen’s testimony comes one day after he was interviewed under oath by the Senate intelligence committee in the first of three congressional appearances this week.

Cohen, who once said he would “take a bullet” for Trump but has since turned against his former boss, appeared before the Senate panel in a closed session on Tuesday.

Over the course of the hearings, NBC News said Cohen plans to “provide evidence of alleged criminal conduct by Trump since he became president”, while the New York Times reported Cohen “will use documents and his personal experiences to support his statements”.

Cohen will appear in another closed session before the House intelligence committee on Thursday. But all eyes will be on what the former Trump aide reveals on Wednesday, when he is to testify before the Houseoversight and reform committee in a public hearing.

Tensions rose ahead of the long-awaited session, when the Florida lawmaker Matt Gaetz on Tuesday appeared to threaten Cohen on Twitter.

Hey @MichaelCohen212 – Do your wife & father-in-law know about your girlfriends? Maybe tonight would be a good time for that chat. I wonder if she’ll remain faithful when you’re in prison. She’s about to learn a lot…

Cohen’s lawyer, Lanny Davis, said his team would not respond to Gaetz’ allegations, “except to say we trust that his colleagues in the House, both Republicans and Democrats, will repudiate his words and his conduct”.

Cohen will be testifying under penalty of perjury but will probably be met with skepticism from Republicans who will seek to draw attention to a track record of dishonesty.

The White House sought to discredit Cohen on Tuesday before the hearings began.

The White House spokeswoman, Sarah Sanders, issued a statement saying he was “going to prison for lying to Congress and making other false statements”.

Sanders said it was “laughable that anyone would take a convicted liar like Cohen at his word, and pathetic to see him given yet another opportunity to spread his lies”.

Lanny Davis, Cohen’s lawyer, told the Times that Cohen’s response to questions about his credibility will be: “I take full responsibility, I lied in the past; now you have to decide if I’m telling the truth.”

Cohen was sentenced to 36 months in prison in December for crimes including lying to Congress about Trump’s business dealings with Russia, and facilitating illegal payments. Cohen is set to surrender on 6 May to begin his sentence, as ordered by a federal judge.

In his guilty plea, Cohen said: “I made these misstatements to be consistent with Individual 1’s political messaging and out of loyalty to Individual 1.”

Individual 1 was a reference to Trump.

Trump denies the allegations and says that Cohen lied to get a lighter sentence.

US lawmakers are likely to hear Cohen testify that Trump asked him several times about a proposed skyscraper project in Moscow long after he secured the Republican presidential nomination, according to reports.

Cohen’s assertion that Trump was inquiring about the project as late as June 2016, if true, would show Trump remained personally interested in a business venture in Russia well into his candidacy.

On 29 November, Cohen pleaded guilty to lying to Congress by telling lawmakers in 2017 that all efforts relating to the Moscow project had ceased by January 2016. In fact, Cohen said, those efforts continued until June 2016.

Trump has repeatedly denied any collusion took place between his campaign and Moscow.

Cohen is also expected to discuss what he knows about a meeting between Trump campaign associates and a Russian lawyer in Trump Tower before the 2016 election, a matter that is of particular interest to special counsel Robert Mueller and congressional investigators.

But he is only expected to discuss matters related to Russia in the closed-door interviews with the congressional intelligence committees, so as not to interfere with special counsel Robert Mueller’s investigation into Russian interference in the 2016 election and links to Trump’s campaign.

Cohen’s week of interviews come as House Democrats launch multiple investigations into Trump’s ties to Russia and conflict-of-interest issues within the administration. House Republicans in the last Congress investigated whether Trump’s campaign coordinated with Russia, but ended that inquiry over Democratic objections, saying that there was no evidence that they did so. The Senate’s Russia investigation continues.

Associated Press and Reuters contributed to this article