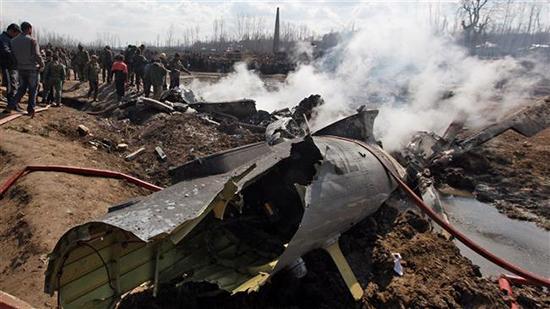 Pakistan says it has shot down two Indian military jets, which violated its airspace, and captured a pilot amid escalating tensions between the nuclear-armed neighbors over the recent developments in disputed Kashmir.

The Pakistani military’s spokesman, Major General Asif Ghafoor, said in a Twitter message that two Indian Air Force planes had been targeted in the airspace over the Islamabad-administered side of Kashmir.

One aircraft went down on the Pakistani side, while the other crashed on the Indian side of Kashmir, the official added.

“One Indian pilot arrested by troops on ground while two in the area,” he said in the tweet, without elaborating.

Reuters cited an Indian official as saying that New Delhi’s jets also intercepted at least three Pakistan warplanes and forced them back after they crossed into Indian territory on Wednesday.

The Pakistani jets intruded over the Bimber Gali- Noushera sector at the Line of Control, said the unnamed official.

The reported airspace intrusion prompted India to close at least four airports in the northern part of the country.

Citing an Indian government official, Reuters said the airports are at Pathankot, Leh, Srinagar and Jammu.

The main airport in Srinagar had been shut down for three hours, according to police.

Overnight, the two sides traded heavy fire along their border in the Kashmir region. Islamabad pledged to surprise India with its retaliatory strikes after India pounded a purported militant training camp on Pakistan soil on Tuesday morning.

Pakistan began shelling the India-controlled side of Kashmir from across the border — known as the Line of Control (LoC) — on Tuesday evening, a spokesman for the Indian defense forces said on Wednesday.

“The Indian Army retaliated for effect and our focused fire resulted in severe destruction to five posts and a number of casualties,” said the spokesman.

He said that five Indian troops suffered minor wounds in the shelling that ended on Wednesday morning.

“So far there are no (civilian) casualties but there is panic among people,” said Rahul Yadav, the deputy commissioner of the Poonch district. “We have an evacuation plan in place and if need arises we will evacuate people to safer areas.”

On the other side of the border, Pakistan’s local officials said at least four people had been killed and seven others wounded in the exchange of fire.

They did not clarify if the casualties were civilian or military.

Earlier, India said that it sought no “further escalation of the situation,” arguing that it had only conducted “pre-emptive” airstrikes against what it called a militant camp on in the Pakistani town of Balakot near Kashmir.

Indian military sources said some 300 militants were killed in the operation, a claim rejected by Islamabad as outright “lying.”

New Delhi said the targeted camp belonged to the so-called Jaish-e-Mohammad (JeM) militant group, which had claimed responsibility for an attack on an Indian security convoy in Pulwama, in Indian-administered Kashmir, on February 14. That attack killed more than 40 Indian troops.

Indian Foreign Minister Sushma Swaraj said on Wednesday that the government in New Delhi carried out the air raids “in the light of the continuing refusal of Pakistan to acknowledge and act against terror groups on its territory.”

“India does not wish to see further escalation of this situation,” she said. “India will continue to act with responsibility and restraint.”

The Indian diplomat also said that “based on credible information … Jaish-e-Mohammed was planning other attacks in… (India).”

“The limited objective of that pre-emptive strike was to act decisively against the terrorist infrastructure of Jaish-e-Mohammed in order to pre-empt another terror attack in India,” Swaraj added.

Swaraj also stressed that “no military installations were targeted” in the raids, and that the target was selected to avoid civilian casualties.

Soon after the bomb attack on Indian security convoy in Pulwama, New Delhi said it “was being controlled from across” the frontier by Pakistan’s main spy agency, and JeM commanders.

Prime Minster Narendra Modi also warned that those behind the bombing “have to pay a heavy price.”

‘No body killed, no damage’

Pakistan, which keeps denying the allegations of having a hand in the mid-February bomb attack, disputed India’s account and dismissed its claim of heavy militant casualties as “self-serving, reckless and fictitious.”

“There is not even a single brick in the debris,” said Pakistani military spokesperson Major General Asif Ghafoor on Wednesday.

He invited foreign diplomats and media to visit the scene of the air raids to verify his country’s account.

Some witnesses in the area also gave their own versions of the incident, saying, “The payload was dropped near the forest in Batrasi, it is totally uninhabited.”

This is believed to be the first time India’s Air Force has crossed into Pakistan since 1971.

Soon after the attack on Pakistan soil, Prime Minister Imran Khan convened a meeting of the National Security Committee, which vowed to “respond at the time and place of its choosing” in a statement.

‘Pakistan knows how to defend motherland’

In the meantime, President Arif Alvi said that Pakistan had no aggressive intention against any nation, but it knew how to defend the motherland from any kind of misadventure.

Addressing an international conference on “Media and Conflict,” on Tuesday, he said, “We know how to defend ourselves,” without mentioning the Indian strikes.

He accused India of pursuing “an irrational approach” toward Islamabad, saying that whenever any terror incident occurred in India, New Delhi blamed Pakistan.

In the meantime, more governments across the world are joining the chorus of warnings, calling on both India and Pakistan to avoid further escalation.

She had said a day earlier that “India and Pakistan are both important countries in South Asia.”

“A sound relationship and cooperation between the two serves the interests of both the countries and peace and stability in South Asia,” the Chinese official said, calling on them to “exercise restraint and do more to improve their bilateral relations.”

The European Union has also reacted to the situation, calling for “maximum restraint” from both sides.

France, in turn, urged restraint and said it “recognizes India’s legitimacy to ensure its security against cross-border terrorism.”

France’s Ministry of Europe and Foreign Affairs asked “Pakistan to put an end to the operations of terrorist groups established on its territory.”

The Australian government also urged Pakistan to take “urgent and meaningful action against terrorist groups in its territory,” and likewise called on both sides to exercise restraint.

“Pakistan must do everything possible to implement its own proscription of Jaish-e-Mohammed,” the government said in a statement.

Iran also called “on the two countries of India and Pakistan to [exercise] restraint and make more efforts to reduce tensions and peacefully settle the existing differences and problems through dialog.”

US Secretary of State Mike Pompeo also spoke separately with the foreign ministers of both countries and called on them to avoid “further military activity.”

“I expressed to both Ministers that we encourage India and Pakistan to exercise restraint, and avoid escalation at any cost,” Pompeo said in a statement issued on Tuesday. “I also encouraged both Ministers to prioritize direct communication and avoid further military activity.”

Taliban warns against prolongation of conflict

The Afghan Taliban militant group also reacted to the ongoing conflict between India and Pakistan, saying, “The continuation of such conflict will affect the Afghanistan peace process.”

“India should not carry any further violence in Pakistan because its continuation will affect regional security also the continuation of such conflict will cost a lot to India,” Taliban Spokesman Zabiullah Mujahid said in a statement on Wednesday.

The group is engaged in a new round of talks with US representatives in Doha, the Qatari capital, to find a solution to the 17-year-old conflict in Afghanistan.