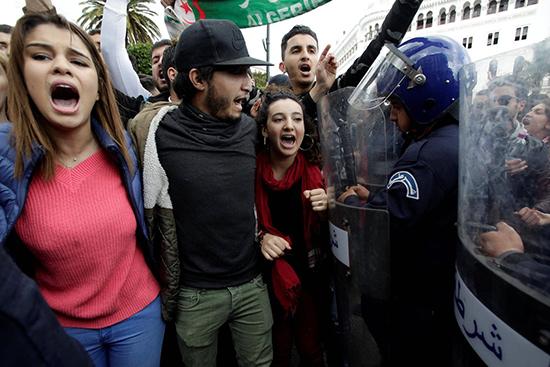 Abdelaziz Bouteflika’s decision to run for a fifth presidential term – despite his poor health and advanced age – is a non-starter for many Algerians.

Hundreds of thousands have taken to the streets in cities across the country as well as abroad over the past several days to peacefully oppose the candidacy of Bouteflika, 81, shattering a wall of silence and fear.

The current Algerian government did not anticipate this unprecedented level of mobilisation. It also shouldn’t expect it to end quickly.

The protests also surprised the international community and observers of Algerian politics, as the country had largely avoided the mass rallies held across the Middle East and North Africa during the so-called Arab Spring in 2011.

Here’s a look at some of the factors that led to the protests in Algeria, and what impact they may have on the country’s upcoming elections.

Bouteflika’s announcement that he would seek a fifth term as president sparked anger among Algerian citizens and kicked off a grassroots movement in several cities after anonymous calls appeared on social media for people to protest.

The protests occurred spontaneously and outside the country’s traditional political power structures, despite the fact that some collectives including Mouwatana – a citizen-led movement that includes political parties, associations and individuals – also urged Algerians to take to the streets.

Algeria hasn’t seen this sort of mass protest movement since a popular uprising in 1988, when youths protested in droves over high unemployment, rising living costs and harsh austerity measures.

In fact, the Algerian population has long been divorced from politics.

Thousands have taken to the streets across Algeria to protest a re-election bid by longtime ruler Abdelaziz Bouteflika pic.twitter.com/6zeCbtevkS

Bouteflika has the potential to be re-elected, including support from the current administration as well as the army, which prioritises stability over possibly risky political change.

The president also has been able to solidify his position through a political and economic coalition that includes the Front de Liberation National (FLN) and the Rassemblement National Democratique (RND), as well as key businesspeople who have emerged during his time in office.

Bouteflika has also benefited from the achievements of his 20-year presidency, including a return to peace, investments, the modernisation and construction of infrastructure, building of housing and universities and access to gas and electricity across the country.

Still, it is also important to note that opposition political parties have crumbled on all fronts, and Algeria’s political and media landscape makes it almost impossible for new personalities or political groups to emerge and transform the system.

Against that backdrop, there are no political candidates powerful or credible enough to mount a serious challenge to Bouteflika.

Nevertheless, the current protest movement may devastate the status quo.

Social despair has worsened under a series of austerity measures applied after a drop in oil prices in 2014, accompanied by inflation of basic-goods prices that hit middle- and lower-class people the hardest

The protests are producing a new dynamic and Algerians are emerging as actors in the political system, something the authorities must now take into account.

We can perhaps ask why this type of movement didn’t happen earlier, during the 2011 revolts in the Arab world or in the last Algerian presidential elections in 2014.

Several factors – some more visible than others – have contributed, including most notably the current poor economic and social situation in Algeria.

The state has invested massive sums to modernise the country’s infrastructure and encourage economic recovery, but it hasn’t succeeded in developing an economy that improves citizens’ purchasing power and provides work for a large number of young, unemployed job seekers.

Corruption and clientelism have created a feeling of injustice among those who haven’t benefited from the country’s riches.

Social despair has worsened under a series of austerity measures applied after a drop in oil prices in 2014, accompanied by inflation of basic-goods prices that hit middle- and lower-class people the hardest.

The longevity of Bouteflika’s presidency – which risks stretching beyond two decades, should he secure a fifth term – has propelled the anger of Algerians and generated a feeling of weariness, if not humiliation, as a result of the president’s poor health.

To run for a fifth term is one time too many in the eyes of a large segment of Algerians.

The president’s absence in the media since he suffered a stroke in 2013, and his visibly fragile state, as shown in pictures that have emerged since then, make his candidacy difficult to defend for members of his entourage this time around.

Moreover, the economic and social progress achieved over the last 20 years has created an Algerian middle class that is politically mature.

That segment of the country’s society aspires to, and in fact, has made political and social demands that are more ambitious than what’s being offered by the government.

Finally, the role of new technologies cannot be ignored. The internet and social media in particular is now available across Algeria, contributing to the spread of the protests and helping to broadcast and coordinate actions in different cities.

In response to all of this, Algerian authorities must seek to advance a dialogue and avoid using defiant discourse – which could worsen the situation – towards the protesters.

They should also put forward concrete measures to help Algeria usher in a real political transition based on a national consensus. Bouteflika himself spoke about just that when he announced that he planned to run for a fifth term.

How the government responds is especially critical, because the protests may prove long-lasting and widespread, as evidenced by the tens of thousands of university students who joined the movement earlier this week.

This article was translated from Middle East Eye’s French website by Jillian Kestler-D’Amours.