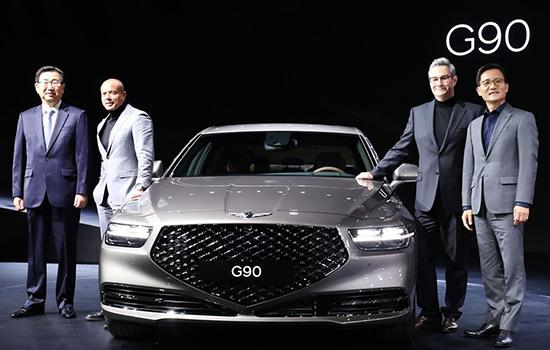 Hyundai Motor will invest 45.3 trillion won ($40.53 billion) in research and development for new cars and future mobility technologies over the next five years, the automotive giant said Wednesday.

The company also set a goal of reaching 7 percent in operating margin and 9 percent in return on equity by then, marking the first time that the company has suggested a tangible operating goal to investors.

“We will continue making efforts to maintain our stable financial structure and recover our competitiveness and profitability,” Lee said.

Most of the new car budget will be used for SUVs and luxury cars. With the investment, the company plans to increase the number of Hyundai Motor and Genesis SUV models from four in 2017 to eight next year. Also, the company seeks to raise its Genesis brand’s U.S. market share to 4.8 percent this year, up from 1.6 percent last year.

For future mobility technology, the company will invest 14.7 trillion won. Of that, car sharing and smart mobility sectors will occupy 6.4 trillion won, vehicle electrification will take 3.3 trillion won and autonomous driving will receive 2.5 trillion won. The remainder will be used for other research fields.

By doing so, Hyundai Motor said it will enhance its existing partnerships with mobility service firms across the world and seek other innovative business opportunities, which can bring synergy between manufacturer and service provider.

The company will debut an electric vehicle platform next year which can be used for various electric vehicles and operate a pilot project of robot-taxi in Korea by 2021.

“The car industry is now facing the first paradigm shift in a century, and it is time to seek fundamental improvements at the very root of the business,” a Hyundai Motor official said.

Lee expected the investment will allow the company to reach its goal of operating margin and return on equity standing at 7 percent and 9 percent, respectively, by 2022.

Hyundai Motor’s return on equity has been declining from 18.6 percent in 2013 to 1.9 percent last year.

Lee also pledged that the company will continue efforts to improve shareholder value. Hyundai Motor posted disappointing earnings last year, but kept its dividends the same as 2017 at 4,000 won per share. Following that, the company share’s payout ratio rose to 70.7 percent last year to 26.8 percent in 2017.

“By expanding investments, we will build the fundamental for sustainable growth,” Lee said. “Also, we will enhance shareholder value through various measures, to achieve those goals early.”