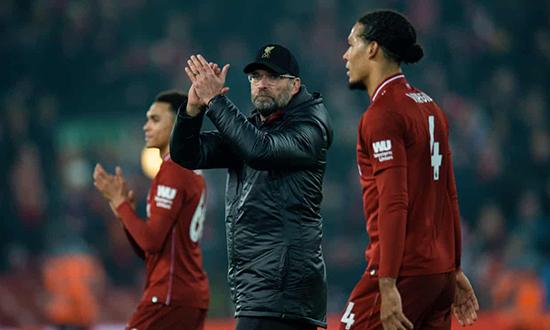 Liverpool manager Jurgen Klopp believes his players sent out a defiant message to their doubters as they recorded an emphatic 5-0 win against Watford at Anfield.

Klopp’s side maintained their one-point lead at the top of the table and carved into Manchester City’s goal difference advantage on a night when their nearest rivals could only beat West Ham 1-0 at the Etihad Stadium, inspiring the Liverpool boss to declare his team is relishing the pressure of the title battle.

“The boys showed how much they enjoy the game and the situation,” declared Klopp. “It was an important sign. You know what was written and said about us. It is of course not right. These boys are outstanding and today they showed so much passion.

“The game from Mo (Salah) was incredible. He was pretty much unplayable. Sadio (Mane) scored a brilliant goal. All three midfielders were outstanding, both centre-halves played outstanding.

“We won 5-0 so you don’t talk about them, but they had their moments. Even Alisson was great. the boys who came on controlled the game. It is just a really good night for us and the boys deserve all the credit. It’s just a special night.”

Trent Alexander-Arnold played a key role in Liverpool’s victory as he provided three assists, with Klopp reserving special praise for a young defender who has been criticised for some of his performances in recent weeks.

“All the crosses were outstanding,” added Klopp. “Trent scored a fantastic free-kick the last time against Watford. I can’t remember the last time he got a hat-trick of assists.

“We want to use our power and our skills but there are different games to play. Watford changed for us too. You always prepare for a match differently.”

Virgil van Dijk scored twice for Liverpool as they rediscovered their scoring touch, with the Dutch centre-back backing up his manager’s view that the win sent out a big statement.

“It was a little bit special obviously but from us, it was a great performance overall. We dominated and played well,” said van Dijk.

“It is very nice to be on the score-sheet as well. Trent’s crossing and delivery is top class. He has been showing it already throughout the season and tonight to get three assists is special.

“We can’t do anything with people’s opinions on the race. We just need to focus on the games that are ahead of us.

“We were all ready and up for it. We wanted to show our fans that we can play like this all season. We enjoyed it. I’m not worrying about anyone else apart from what is in the dressing room. I am just enjoying it.”

Sir Alex Ferguson: ‘Did I think we could still beat Bayern in 1999? No chance!’