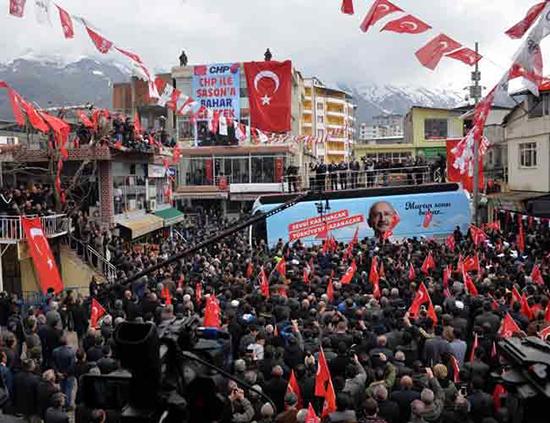 We will stay away from fights, gain an historic victory in the local elections and will make a new start,” he said.

Kılıçdaroğlu held a rally in the Sason district and was accompanied by the CHP’s municipal candidates of Turkey’s western Konak, Büyükçekmece and Çankaya districts.

He said unemployment is one of the most important problems in the country.

“They say Batman is the capital of unemployment. They say external powers are behind this. Has the country been run by external forces for the last 17 years? We are living in hell on Earth. I hope we will win in Istanbul, İzmir, Bursa, Mersin, Adana and Ankara [provinces] in the local elections,” Kılıçdaroğlu said, referring to the ruling Justice and Development Party’s (AKP) 17-year tenure.

He said that people living in Istanbul come to districts run by CHP municipalities to feel relieved.

“We believe in you. Serving you means serving God. We see serving you as a sacred duty. If a child goes to bed satisfied and full, peace will come to Turkey,” he told the crowd in Sason.

Kılıçdaroğlu has increased the number of rallies to be held before the elections on March 31 to 32. He will hold joint meetings with İYİ (Good) Party chair Meral Akşener in the western provinces of Denizli, Aydın and Balıkesir.

The CHP leader will hold a total of 32 rallies in 26 cities. Seven of them will be in Istanbul, while four in Ankara, three in Bursa, Mersin and Hatay and two in Adana. One rally will be held in the other provinces.

He will be in Bursa today, Mersin on March 1, Muğla on March 2 and Adana on March 3.

The joint rally with Akşener will be on March 6 in Denizli, March 7 in Aydın and March 17 in Balıkesir.