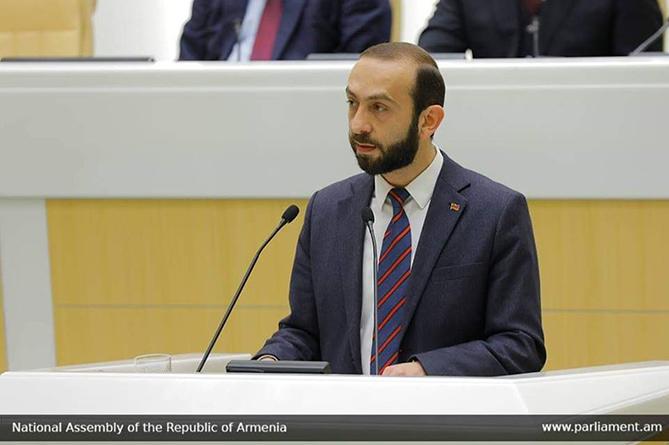 YEREVAN, February 28. /ARKA/. In a speech made at the Federation Council, the upper chamber of the Russian parliament, Armenian parliament speaker Ararat Mirzoyan, said Armenians were perplexed to learn that some members of the Russian-Armenian inter-parliamentary commission participated in an anti-Armenian rally held in Azerbaijan’s capital Baku.

“I have to state with regret that despite the high level and allied interaction between our countries, as well as the consistent efforts of the Russian side for the peaceful resolution of the Nagorno-Karabakh conflict, some of our Russian colleagues participated in a pronounced anti-Armenian rally in Baku aimed to undermine peace and stability in the region. Moreover, we were perplexed to learn that some members of the Russian-Armenian inter-parliamentary commission also participated in it,’ he said.

Mirzoyan stressed that Armenia remains committed to an exclusively peaceful settlement of the Nagorno-Karabakh conflict based on the realities in the region and on the basis of the fundamental principles of international law, including the right of peoples to self-determination.

“In this context, I would like to emphasize that we highly appreciate the role of the Russian Federation as the co-chair country of the OSCE Minsk Group,” he added.

Mirzoyan said the humanitarian component of the Armenian-Russian relations is becoming even more relevant in the days when the entire Armenian people recall the victims of the Sumgait massacre in February 1988.

“These days, Armenians around the world commemorate the victims of the ominous Sumgait massacre that took place more than thirty years ago and became the forerunner of pogroms against Armenians in Azerbaijan, initiating its policy of full-scale ethnic cleansing. This led to a mass exodus of the Armenian population from Baku, Sumgait, Kirovabad and others cities of Azerbaijan,” he recalled.

On February 26-29, 1988, with the actual support of the Azerbaijani authorities and with the tacit connivance of the leadership of the USSR, mobs made up of ethnic Azerbaijanis formed into groups and attacked and killed Armenians on the streets and in their apartments in Sumgait, a city 30 km away from Baku.

Widespread looting and a general lack of concern from police officers allowed the situation to continue for three days. According to official figures, 27 Armenians were killed and hundreds were injured. Some 18 thousand Armenians of Sumgait fled the city within several days. However, according to numerous facts and testimonies, the death toll in Sumgait is much higher  ranging from 100 to 200 people.

Sumgait pogrom is commemorated every year on February 28 in Armenia, Nagorno-Karabakh and the Armenian Diaspora.