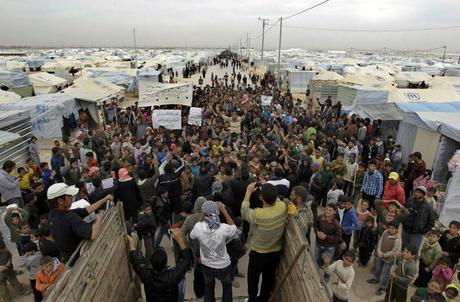 The refugee talks between President Michel Aoun and EU Foreign Policy Chief Frederica Mogherini have shown a “major difference” in approaching the file and in the ways to secure their return to Syria, al-Joumhouria daily reported on Wednesday.

While Mogherini said it was difficult to begin a program at present to return Syrian refugees before reaching a political solution in Syria, President Michel Aoun has affirmed Beirut’s commitment to work for the return of refugees to safe areas in their war-torn country without waiting for a political solution.

President Michel Aoun added that Lebanon will try to ensure that Syrian returnees are not in danger.

The EU had stated in the past that the return of refugees in large numbers should take place after the war in the neighboring country comes to an end.

Aoun and his allies in Lebanon, including the powerful Hezbollah group, support having contacts with the Syrian government saying it would help facilitate the return of refugees. On the contrary, politicians from the Western-backed coalition, led by Prime Minister Saad Hariri, refuse such contacts with Damascus before a solution is reached for the conflict that has killed more than 400,000 people.

Aoun suggested that international assistance to refugees be given to them after they return home in order to encourage them to do so, adding that their presence in Lebanon is making them compete with Lebanese for jobs and increasing emigration among Lebanese citizens.

Syria’s nearly eight-year conflict has led to the displacement of half the country’s population and created more than 5 million refugees, who fled mostly to neighboring Lebanon, Jordan and Turkey.

Lebanon is home to some 1 million Syrian refugees, a quarter of the country’s population, putting pressure on the country’s crumbling infrastructure. An estimated 70 percent of them live in poverty.

Amnesty International issued its report on the Middle East and North Africa on Tuesday saying that although Lebanon is hosting hundreds of thousands of Syrian refugees, the tiny Arab country has kept its border closed to people fleeing the ongoing conflict.

Since 2015, Lebanon has imposed restrictions on Syrians coming to Lebanon, slowing their flow into the country.

“Syrian refugees continued to face financial and administrative difficulties in obtaining or renewing residency permits, exposing them to a constant risk of arbitrary arrest, detention and forcible return to Syria,” Amnesty said.

Mogherini later met with Hariri and Parliament Speaker Nabi Berri who told her that the EU should play an active role on demarcating the maritime border between Lebanon and Israel.

The Lebanon-Israel dispute dates back years but resurfaced last year when Lebanon invited companies to bid for exploratory offshore drilling next year along the countries’ maritime border. Israel claims Lebanon will be drilling partly in areas owned by Israel. Lebanon and Israel are technically at war, and quarrel over their land borders.