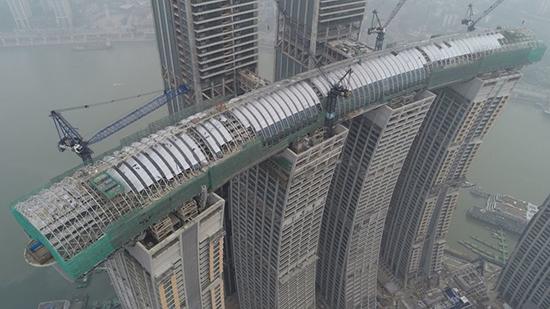 A staggering 1.12-million-square-meter megastructure is expected to open in the Chinese city of Chongqing later this year. It will consist of eight skyscrapers connected by a gigantic sky bridge.

Known as Raffles City Chongqing’s ninth ‘horizontal skyscraper’, the sky bridge, or ‘The Crystal’, is said to be one of the world’s highest. It is 300 meters in length, 32.5 meters wide, and 26.5 meters high. The construction is nestled above four of the 250-meter skyscrapers and links two adjacent towers by cantilevered bridges. At night, it transforms into a giant light beam, illuminating the sky with a rousing light show.

The megaproject was developed by one of Asia’s largest real estate companies, CapitaLand.

“After six years of construction using state of the art engineering technologies, we are proud to present in Raffles City Chongqing an iconic architectural form resembling a powerful sail surging forward on the historic Chaotianmen site,”saidLucas Loh, president (China & Investment Management) at CapitaLand.

“Upon Raffles City Chongqing’s structural completion, we are now focusing on the interior fit-out works, including transplanting trees to enliven The Crystal sky bridge, which will feature the tallest observation deck across Western China,”he added.

The megaproject occupies an area of 9.2 hectares and brings together a 235,000-sq m shopping mall, office spaces, residential apartments, residences, and a hotel. Two of its skyscrapers are 350 meters tall and are known as Chongqing’s tallest buildings; one of them was also named China’s tallest residential tower. The other six skyscrapers are about 250 meters tall. The ambitious development is strategically located at the confluence of the Yangtze and Jialing rivers.