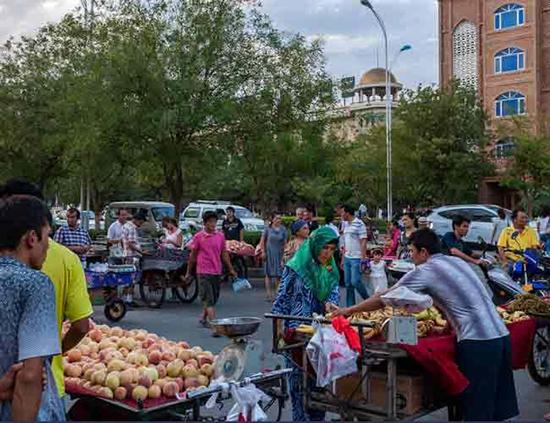 Turkey’s determination in cooperating with China as part of the latter’s “One Belt One Road Initiative” has not changed despite an ongoing spat over the treatment of Uighur Turks, Turkish Foreign Minister Mevlüt Çavuşoğlu has said, reiterating Ankara’s call for Beijing to “separate terrorists from innocent civilians.”

At a conference at TOBB University of Economics and Technology on Feb. 27, Çavuşoğlusaid he had a lengthy meeting with China’s new ambassador to Turkey, Deng Li, on Feb. 26 in the Turkish capital to discuss recent developments.

“We are following the problems of the Uighur Turks very closely. It’s real that there is a problem over there. Otherwise, there would not be that much global attention,” Çavuşoğlustressed.

There are some problems, but there are those who are also trying to manipulate them by distorted facts on social media, the minister added. “But, still, this does not deny that there is a problem,” he said.

Ties between the two countries were strained after Turkey harshly slammed China over imposing restrictions on Uighur Turks in a written statement on Feb. 9 that said “It is no longer a secret that more than one million Uighur Turks incurring arbitrary arrests are subjected to torture and political brainwashing in internment camps and prisons. Uighurs who are not detained in these camps are under heavy pressure.”

China responded to the Turkish statement and denied allegations over the state of the Uighur Turks, while highlighting that it needs to fight against terrorism.

Every nation has the right to fight against terrorism, and there are Uighur Turks who had joined ISIL, Çavuşoğlu said. “An Uighur Turk who joined DAESH is a terrorist, just like we see a Turkish citizen joining the PKK or the YPG as terrorist. But what we tell the Chinese side is that innocent civilians should be separated from the terrorists. I said this to the Chinese ambassador, with whom I had a lengthy meeting yesterday.”

Turkey’s wish is to be in close cooperation with China for the resolution of this problem, the foreign minister stated.

On a question about China’s massive “One Belt One Road Initiative,” Çavuşoğlu described it as a project of a big vision and expressed Turkey’s continued interest in it.

“The fact that we have a problem with China on an issue should not necessarily hinder our cooperation on other matters. We may link China’s One Belt One Road Initiative with our own Middle Corridor Initiative so that a direct line between London and Beijing could be set up,” he stated.

Turkey and China signed the “Memorandum of Understanding on Aligning the Belt and Road Initiative and the Middle Corridor Initiative” in 2015 in a bid to align the two projects.

Earlier in the week, Çavuşoğlu attended a U.N. Human Rights Council meeting in Geneva and repeated Turkey’s expectations from China regarding the Uighur Turks. Beijing replied to criticisms voiced at that meeting and called on countries to take an objective view of China’s policy.

Turkey has itself been a victim of terrorism and separatist forces for a long time, he said.

“But some people in Turkey do not see the basic facts, and keep besmirching China’s counter-terrorism and de-radicalization efforts and slandering the steps taken by China’s Xinjiang autonomous regional government. It can only be said that there is a hidden agenda,” Lu said.

U.N. experts and activists say the camps hold one million Uighurs, who speak a Turkic language, and other Muslims. China has denied accusations of mistreatment and deems criticism within the U.N. council as interference in its sovereignty.