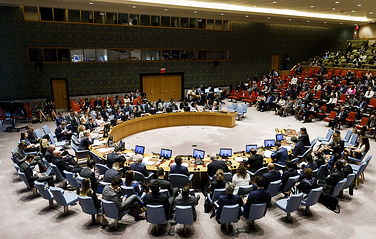 United Nations, USA: The UN Security Council will vote Thursday on two rival draft resolutions from the United States and Russia aimed at confronting the crisis in Venezuela, but both are expected to fail, according to diplomats.
Battered by an economic meltdown, Venezuela descended into a major political crisis when opposition leader Juan Guaido declared himself interim president in January and asserted that President Nicolas Maduro was no longer legitimate.
On Wednesday, the United States put forward a measure that would call for presidential elections to end the political standoff and unimpeded deliveries of aid to ease shortages of food and medicine in Venezuela.
A competing Russian text urges a peaceful settlement of the crisis and recalls that aid deliveries to Venezuela require the consent of Maduro’s government.
The council is set to vote around 9:30 am (1530 GMT) on both proposed measures.
Russia and China, which support Maduro, are likely to veto the US draft resolution that “expresses deep concern about the actions of a regime that have caused an economic collapse,” diplomats said.
But the Russian measure, which expresses “concern over the threats to use force” against Venezuela, is unlikely to garner the nine votes for adoption, according to diplomats.
Resolutions at the Security Council, which are legally binding, must garner nine votes to be adopted, with no vetoes from the five permanent members — Britain, China, France, Russia and the United States.

The US-drafted text, seen by AFP, calls for “free, fair and credible presidential elections,” with the presence of international observers, describing the May vote in which Maduro was declared the winner as “neither free nor fair.”
It expresses support for “the peaceful restoration of democracy and rule of law in Venezuela” and requests that UN Secretary-General Antonio Guterres broker a deal on holding fresh elections.
Russia’s draft resolution urges a settlement “through peaceful means” and welcomes calls by Guterres for dialogue, according to the text seen by AFP.
The United States is leading a push for recognition of Guaido, who heads the National Assembly, backed by about 50 countries.
The crisis turned violent over the weekend when four people died in clashes at Venezuela’s borders during an attempt led by Guaido to bring in humanitarian aid from Colombia and Brazil.
Maduro has accused the United States of using aid as a political tool aimed at overthrowing him, and blames US sanctions for the economic turmoil.
UN expert Richard Gowan said the United States is hoping to pile pressure on Caracas by showing that a majority of council members back its stance, even if Russia and China block the measure.

“If Beijing and Moscow kill it off, the US will claim the moral high ground,” said Gowan, a senior fellow at the UN University Center for Policy Research.
“The problem is what the US does next after this resolution fails. Does it keep trying to pile moral pressure on Maduro, or does it conclude the UN diplomatic route is dead?“
In Geneva earlier, Venezuelan Foreign Minister Jorge Arreaza proposed direct talks between the leaders, asking: “Why shouldn’t they meet, President Trump and President Maduro?“
But US Vice President Mike Pence responded on Twitter that “the only thing to discuss with Maduro at this point is the time and date for his departure.”
In an address to the council on Tuesday, the foreign minister accused the Trump administration of having a “script to justify war” against his country and urged the council to adopt a measure opposing the use of force.
The US-drafted measure “stresses the importance of ensuring the security” of all lawmakers and opposition members, but a reference in a previous draft expressing “full support” for the National Assembly was dropped.
At a council meeting on Tuesday, US envoy Elliott Abrams said his government was “deeply concerned” about Guaido’s safety after Maduro said in an interview that the opposition leader would have to face justice when he returns from Colombia.
Guaido was to travel to Brasilia to meet President Jair Bolsonaro on Thursday.