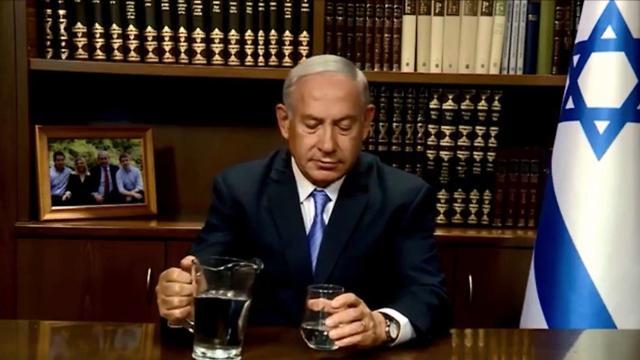 Netanyahu also addressed AIPAC before the last Knesset election in 2015.

The petition was launched the day before Attorney General Avichai Mandelblit announced his intention to indict the prime minister for bribery, pending a hearing. It kicked off on the heels of Netanyahu’s decision to publicly go to bat for the extremist Otzma Yehudit Party.

In order to get Otzma Yehudit to join the Bayit Yehudi-National Union slate for the next Knesset – now known as the Union of Right-Wing Parties (URP) – Netanyahu made an unprecedented offer to Bayit Yehudi. Not only did he promise them cabinet seats, which is standard in putting together a coalition, but he offered the party a seat on the Likud list, which Deputy Defense Minister Eli Ben-Dahan now fills.

The petition states that Netanyahu has “forged an alliance with racists. AIPAC should condemn him, not make him a featured speaker at its policy conference.”

According to APN, speaking at AIPAC provides the PM with what Israelis perceive as “the seal of approval of pro-Israel Americans just before elections.” Elections are April 9.

However, this “seal” may prove less necessary, as President Donald Trump on Thursday spoke about the prime minister, saying “he’s tough, he’s smart, he’s strong,” and said Netanyahu has “done a great job as prime minister.”

The petition goes on to state that “Netanyahu made common cause with Otzma Yehudit, a party led by followers of the racist ideology of Rabbi Meir Kahane. Netanyahu orchestrated a deal to ensure Otzma’s representation in the next Knesset. The party’s platform calls for “total war” against “Israel’s enemies” (read: Palestinians) and their expulsion from Israel, the West Bank, and Gaza.

“After Bibi brokered the Otzma Yehudit deal, AIPAC called it a “racist and reprehensible” party,” the petition continued. “But the very next day, AIPAC announced it was ‘honored’ to host Netanyahu at its conference. This is unconscionable.”

Netanyahu also addressed AIPAC before the last Knesset election in 2015.

The petition does not show how many people have signed as of March 1, but the Jewish Press was reporting that more than 1,000 individuals had signed the petition as of February 28.

Lahav Harkov contributed to this story.