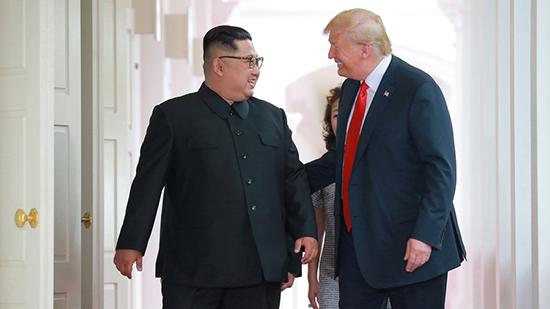 The Korea Times -By Oh Young-jin

After his no-deal Hanoi summit with U.S. President Donald Trump, one question worth pondering, however implausible it may sound in the immediate and confusing aftermath, is: would Kim Jong-un, the youthful North Korean leader, be able to hang on to power?

Kim was reportedly ditching some of his remaining itinerary to go home early after splitting from Trump without having lunch together in the Vietnamese capital Thursday. But it would not soften the reality that he is going home empty-handed.

The failed mission may pose an existential threat to Kim, who has inherited fear-based rule from his father Kim Jong-il and his grandfather and national founder Kim Il-sung.

The problem is that the young Kim lacks the charisma of his granddad, who was appointed to lead a Soviet puppet regime and solidified power by an incessant series of purges, or the long apprenticeship his father had as heir apparent.

Judging from the events leading to his ascension, the young Kim was hurriedly chosen by his father during his dying days. So Kim owes his status to his blue lineage, but that is where his legitimacy ends.

That means he can scarcely afford to look weak or otherwise have his supposed image of ideological immaculacy tarnished. The Hanoi affair could do that damage to him.

A contrast with Trump can be striking. The U.S. president, being called in public a “racist, liar and conman” by his once close lieutenant Michael Cohen while he was meeting Kim, has had his reputation damaged so much so that another failure will not make much difference.

For Trump, the worst would be an impeachment if the Muller probe confirms Russians helped in his 2016 presidential election. He could pull the Nixon act in the Watergate scandal ― resigning before the Senate vote and get his successor, Vice President Mike Pence, to pardon him.

But for Kim, it would be a different story.

If it was intended to counter Trump’s early solo meeting with the media, the wee-hour news conference by the North’s Foreign Minister Ri Yong-ho and Vice Foreign Minister Choe Son-hui lacked punch.

It appeared that the North Koreans including Kim genuinely felt more than disappointed. In its first reaction after the failed summit, the North’s state media meekly stated that the two countries had agreed to continue their productive path of dialogue. The absence of its usual vitriolic tempts one to believe the North is becoming a normal state.

A potential clue about the North’s state of mind pertains to its revelation that the North did not demand the sanctions [sic] be lifted “in its entirety’ as Trump said, but asked on a selective basis for the easing of those directly affecting its people’s livelihoods.

This signifies and confirms that the international sanctions are affecting the North, including its elite and the military. Kim’s hold on power depends on the loyalty of the two pillars. The continued sanctions will test their already-strained patience further.

The military is obviously unhappy to think that its leader with no military experience is willing to bargain away its “treasure sword” of nuclear weapons for what uncertain benefits the isolated country would get by opening up.

So with Kim’s negotiating efforts failing and the outlook for a prolonged deadlock, how would Kim keep the hounds at bay?

Kim showed toughness by machine-gunning his uncle and having assassins poison his elder half brother to consolidate his power and performed a constant rotation of promotion and demotion among power circles to keep them on their toes. But doubt is growing about the strength of his grip on power. When he travelled to Hanoi, he was imitating his grandfather’s 1964 train ride to Vietnam; and he still relies on his younger sister for up close and personal protocols.

Kim still enjoys being coiffed like his grandfather and has built up an overly generous girth for his age in an obvious effort to acquire what precious little legitimacy he has as the ruler.

In Hanoi, he was caught in moments that revealed he was just a kid, more appropriate for a young man fitting his age, when he stepped outside his train and appeared with a swollen face and glazed eyes from a mixture of anxiety and tiredness. Maybe he is showing the limits of a person with a modern Western education in ruling a secluded, international pariah state.

In White House spokeswoman Sarah Sanders’ Instagram photo showing Kim parting with Trump, Kim is smiling broadly, but he is looking at the camera, not at Trump. Maybe Kim could not bear all honorifics and respectful gestures Trump poured on him, concluding that the U.S. President was merely trying to look fatherly and was being condescending.

Whether Trump intended it or not, the no-deal summit the U.S. president got what he had sought: an edge over Kim. Of course, it remains to be seen whether Trump can stay on the job long enough without distractions to use this edge or what consequences might ensue if Kim tries to break the spell ― if he can.