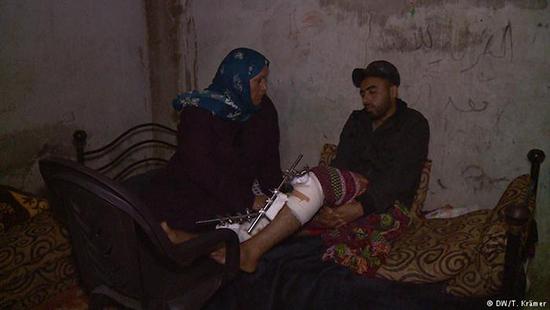 Gaza has been effectively cut off from the outside world since Hamas took over more than 12 years ago. The situation is especially difficult for young people, as Tania Krämer reports from Gaza City.

For the past year, young people on crutches have become a common sight on the streets of Gaza City. And Mahmoud Abu Zer is one of them. He sits on his bed in a sparsely furnished room in the crowded neighborhood of Al Nafaq and can barely move. Metal plates and bandages are strapped around his calves.

Two weeks ago, he was shot in both legs by an Israeli sniper while slinging stones at Israeli soldiers across the fence during weekly Friday demonstrations, he says. The 19-year old went almost every Friday to one of the protest sites along the border. “It was a normal thing to do. All my friends are there,” he told DW.

The “Great March of Return” is a series of demonstrations that started a year ago, calling for an end to Gaza’s crippling air, sea and land blockade and demanding the right of return to what is today Israel. Most of the young protesters have never set foot outside Gaza because of severe travel restrictions, which Israel says are there for security reasons.

The blockade was imposed by Israel, and to some extent by Egypt, to put pressure on Hamas, which seized control of Gaza from the Palestinian Authority in 2007. More than a decade later, and after three wars between Hamas and Israel, people struggle to find jobs, receive only a few hours of electricity per day and are bitterly disappointed at the faltering reconciliation between Hamas and Fatah. With no political solution in sight, the risk of a new war between Hamas and Israel is always on their minds.

On Thursday Israeli Foreign Minister Israel Katz rejected a UN rights panel report that accuses Israeli forces of committing possible war crimes during the protests last year, describing it as a “theater of the absurd.” In their report, investigators said the vast majority of Palestinian protesters were unarmed.

Israel accuses Hamas of orchestrating the demonstrations in order to stage attacks. Since March last year, the UN says, over 180 Palestinians have been killed and over 6,000 shot at with live ammunition, among them children, paramedics and journalists. Thousands more have been injured. On the Israeli side, one soldier was killed by a sniper and several have been injured. Kites with explosives attached have set fields and agricultural land in Israeli communities alongside the Gaza Strip on fire.

No perspectives, no sense of a future

Mahmoud Abu Zer says he went to the demonstrations because there’s not much to lose. “There is no such thing as a future for young people here; I’d give both of my legs to make things better for my family,” he said defiantly. Before being shot he used to work as a car mechanic, but in the past five months he’s been unable to find any work.

He is one of the many young people looking for a stable job, with youth unemployment at 70 percent, according to the World Bank. “They used to call when they needed me. But now — that’s it. Everything will be different anyway. If I want to go to the front door of the house, I need help from two or three people to lift me up.”

His mother had reservations about him participating in the protests. “There is no work, neither for the young nor the old. I believe some go to the protest because they want to escape the life they are living in. Some might even want to be shot,” she told DW. The injury adds to the already dire situation of the family. Except for her oldest son, who works as a tailor but hardly finds customers, all her children are looking for work. And they are still waiting for the symbolic sum of $100 (€88) that Hamas gives to injured people.

There is growing anger among people over their harsh living conditions and the feeling of a total lack of control over their own future. It has also put Hamas under increasing pressure as some analysts suggest that by directing the protests towards Israel, Hamas has been trying to deflect from its own failures to deliver to Gaza’s citizens. Others echo similar feelings of loss of hope but say that the protests simply became too dangerous.

“I didn’t like to participate in them and I won’t,” said Bilal Abu Nadi. “It’s not because I don’t feel loyal, but I have responsibilities on my shoulders.” The young Palestinian lost his job with a nongovernmental organization a year ago and calls himself lucky to have found paid work once again in his uncle’s carpentry workshop.

“You know, Gaza is beautiful, but life here has become almost impossible. Especially for young people. I think if the political and economic situation won’t change, most would leave tomorrow if they could.” Over shisha and coffee, one of Bilal’s friends elaborates that “life here is like being dead, only that you still breathe. We heard a lot of speeches from politicians from all sides but nothing changed. We are only going further down.”

It’s not easy to leave Gaza. Hala Shoman has not been able to travel anywhere in the past years, like most of those of her generation. The aspiring young dentist works at two clinics to earn what she estimates to be $250 per month, and also volunteers as a paramedic when needed at the protests. Due to the irregular opening and closing of the border crossing with Egypt, she missed out on a PhD scholarship in Turkey because the crossing was closed at that time. “To lose that opportunity made me depressed. I didn’t talk or eat for the first seven days,” she told DW.

Marie-Elisabeth Ingres heads Doctors Without Borders, which runs the clinic in Gaza where Mahmoud Abu Zer is now a regular outpatient. The organization and other health institutions are now working on upgrading their facilities to treat bone infections, which have become common in injuries like Mahmoud’s due to the crumbling state of medical care in Gaza.

“There is window of opportunity that if we treat these people today, we could save their limbs. If we don’t manage in the coming months, we will see that a lot of these young people will have amputations because it is too late.”