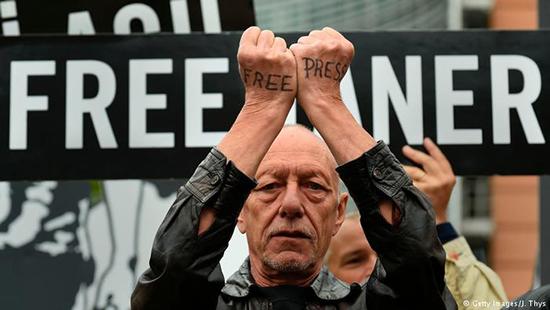 Several foreign journalists in Turkey are still waiting for their 2019 accreditations. Reporters Without Borders says the delay is a “brazen attempt to restrict independent foreign reporting.”

The German wing of media oversight organization Reporters Without Borders has urged Turkish authorities not to hinder the job of foreign correspondents in the country.

The group said a number of foreign journalists, including half of the German correspondents in Turkey, have been waiting for their accreditation to be renewed since the beginning of the year.

On Thursday, some foreign journalists were denied entry to a press conference with Turkish Finance Minister Berat Albayrak and a Vice President of the European Commission, Jyrki Katainen, in Istanbul because they had yet to receive their new press cards.

Christian Mihr of Reporters without Borders in Germany said the delay in handing out new accreditation was a “brazen attempt” by Ankara to “restrict independent foreign reporting.”

“The Turkish authorities must immediately ensure that foreign correspondents in Turkey can work freely,” Mihr said.

The press cards allow foreign journalists to work and live in Turkey.

Turkish government officials attributed the delay to the switch from a parliamentary to a presidential system after the elections in June.

Mihr rejected the explanation, saying that with just weeks to go before key local elections in Turkey, the delay could hardly be a result of a “bureaucratic glitch.”

According to the Reporters Without Borders, more than 100 reporters are sitting behind bars in Turkey, which the group refers to as the “world’s biggest prison for professional journalists.”

In January, a court in Istanbul sentenced DW journalist Pelin Unker to 13 months and 15 days in prison over her reports about a suspected link between a former premier and an offshore account.