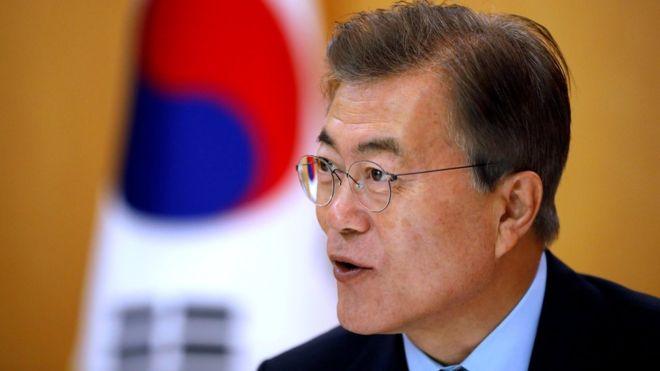 South Korea’s President Moon Jae-in on Friday portrayed this week’s fruitless summit between the United States and North Korea as part of a process for a “higher level” agreement and stressed the importance of Seoul’s role of mediating between the two sides.

During his speech marking the centennial anniversary of the March 1 Independence Movement against Japanese colonial rule, Moon also put a positive spin on the Hanoi summit held Wednesday and Thursday, saying it produced “meaningful” progress.

“Importantly, they even discussed the issue of installing liaison offices, an important step toward the normalization of bilateral ties. I have high regard for President Trump, who has expressed his commitment to continuing talks and optimistic views,” he said.

“Now our role has become even more important. My administration will closely communicate and cooperate with the United States and North Korea so as to help their talks reach a complete settlement by any means,” he said.

Donald Trump and Kim Jong-un walked away from their highly anticipated summit Thursday after they failed to meet halfway over Washington’s sanctions relief and the scope of Pyongyang’s denuclearization.

It came as a surprise as many expected them to produce a deal that would at least shut down or freeze the North’s mainstay Yongbyon nuclear complex in return for the U.S.’ concessions, such as partial sanctions relief.

Trump has left open the possibility of future negotiations, sparking speculation that his withdrawal from the summit may be part of his negotiation strategy to throw his partner off balance and wring concessions out of him or her.

For more than a year, Moon has been a key driver of efforts to facilitate the Trump-Kim summit, inter-Korean cooperation and shape a “new order” of enduring peace on the divided peninsula.

During the speech, Moon appeared to have refrained from directly criticizing Japan’s wartime misdeeds in a gesture to keep Seoul’s drive for a “future-oriented partnership” and move past a set of historical spats stemming from Tokyo’s 1910-45 colonization.

His apparent olive branch to Tokyo appears intended to encourage the neighboring country to play a constructive role in the process of denuclearizing the peninsula and fostering a lasting peace regime here, observers said.

Moon, however, stressed the long-overdue tasks of “wiping out the vestige of pro-Japanese collaborators in a forward-looking manner” and “setting history right.”

“Only when we contemplate past wrongdoings can we move toward the future together. The task of setting history right is what is needed to help our future generations stand tall. Firmly upholding the national spirit is the state’s responsibility and duty,” he said.

“What we intend is neither to instigate divisiveness by reopening old wounds now nor to create issues for diplomatic conflicts with a neighboring country. Neither of these is desirable.” (Yonhap)