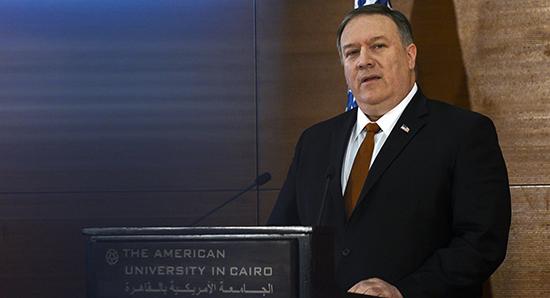 In early February, Beijing reportedly deployed about 95 Chinese ships to Thitu Island, one of several disputed islands in the South China Sea, in a bid to stop ongoing construction work carried out by the government of The Philippines.

US Secretary of State Mike Pompeo has pledged to defend the Philippines against a possible “armed attack” in the disputed South China Sea.

Speaking to reporters in Manila on Friday, Pompeo said that Beijing’s construction of artificial islands and military activity in the South China Sea threaten the Philippines’ “sovereignty, security and therefore economic livelihood, as well as that of the United States”.

He referred to a 1951 US-Philippines treaty which specifically obliges the two sides to come to each other’s aid in the event of an “armed attack in the Pacific area” on either party.

Pompeo’s remarks came a few weeks after Beijing reportedly deployed a fleet of almost 100 ships, including coast guard vessels, to Thitu Island, one of several disputed islands in the South China Sea, in order to stop the Philippine government from conducting construction work in the area.

Apart from China and the Philippines, a spate of other countries, including Brunei, Indonesia, Malaysia, Vietnam, and Taiwan have competing claims to parts of the South China Sea, a strategic and economically crucial waterway through which some $5 trillion in annual global trade passes.

China controls the vast majority of islands, reefs and shoals in the region, and is building up an array of artificial islands in a bid to further shore up its claims. Beijing insists on negotiating the issue at the regional level, while the US has initiated naval freedom of navigation missions to contest China’s claim.