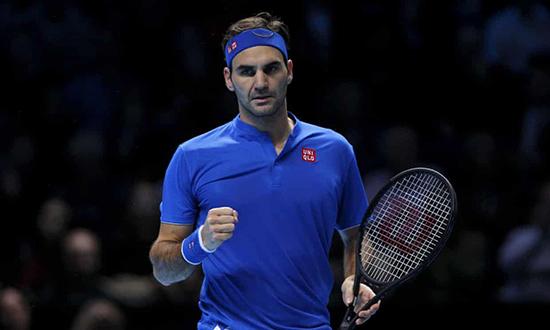 Roger Federer moved to within two wins of a 100th career title on Thursday after coming through a tough test in  difficult conditions against Marton Fucsovics to reach the Dubai Championships semi-finals. The seven-time champion beat his Hungarian opponent 7-6 (8/6), 6-4 in conditions which were far from comfortable with gusting winds and brief rain delays. “You just go out there and try your best. Sometimes you get in the lead, sometimes you don’t. It was important not to get down in the score early on,” Federer said.

“It was tricky. A couple of rain delays, especially one at 5-all, coming back with sort of no preparation.

“The energy of the body, the adrenaline, tactics, all that stuff kind of fades away just a little bit in those rain delays.

“We made the most of it, the tie-breaker was tough. I’m happy I found a way to get out of that one. That was an exciting match, to say the least.”

“You look at the score at home and it looks like an easy straight sets,” said Federer.

“But it is so close, you can never underestimate anyone. I’m very happy with my level. It was tough with the wind,  but it’s a challenge and that’s why I’m here.”

Federer had to save two set points in an opener which lasted for just over an hour.

He then got into his rhythm but needed a big effort to break on his fifth chance of the ninth game of the second set, taking a 5-4 lead before serving it out on his second match point.

Tsitsipas had to dig deep to get past Hurkacz, who knocked out top seed Kei Nishikori in the second round, going  the distance in the first two sets and being broken when serving for the match, before seeing off the world number 77 after more than two-and-a-quarter hours.

“The breaks I got in the third set refreshed my mind. I was able to raise my level,” Tsitsipas said.

“I knew that if I kept fighting, more chances would come — and they did.

“I was serving a bit better, maybe opening the court, making like less mistakes, being aggressive. When I broke him first time, I showed him that I’m still in the match.”

Unseeded Monfils, 32, revealed that he needed to get angry with himself to get over the line after missing chances to close out a straight-sets victory when a set up and leading the second 5-4.

“It was tough mentally, I was upset that I didn’t finish it (then). I had to get angry to find the energy to come back,” he said after coming from a break down to storm through the final set.

“I was playing flat, I knew I had to do something.

“My opponent was very brave, he went for his shots, came to the net and made it difficult.”

Monfils’ performance dipped drastically after ripping through the opening set in 23 minutes, losing the second and rediscovering his game only just in time to claim victory.

In the end it took nearly two hours for Monfils to beat Berankis, ranked 113 in the world and playing his first quarter-final since October.

“The last three games was just pure anger. I was aggressive, but I was little bit worried,” Monfils said.

“I wanted this match even more. The intensity, definitely it’s something positive.”