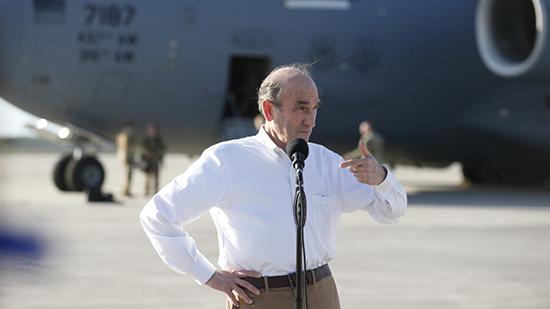 Russia  Today
US envoy to Venezuela and regime change enthusiast Elliott Abrams offered no specifics on the US’s further plans to oust President Nicolas Maduro, but warned that “dictatorships come to an end.”

Speaking to reporters on Friday, Abrams – the regime change engineer behind Iran/Contra – dismissed warnings from Russian Foreign Minister Sergey Lavrov that the US might intervene militarily in crisis-stricken Venezuela.

“I don’t think he actually believes we’re attempting to do that,” Abrams said. Abrams did state the oft-repeated line that “all options are on the table,” but that the US would stick to economic, diplomatic, and other “appropriate actions” for the meantime.

“Dictatorships come to an end,” Abrams shrugged when asked about “loosing momentum” and comparisons between Libya and Venezuela.“Some last for a very long time, others a much shorter time. This one in Venezuela will also come to an end. We hope that it comes to an end quickly and peacefully.”

With military intervention shelved for the meantime, Abrams gave self-declared interim president Juan Guaido a pep talk. Guaido, he said “has become much more of an international figure in the last week,” meeting with various Latin American leaders and with US Vice President Mike Pence.

However, the US’s star pupil has thus far failed to win over the support of Venezuela’s military and failed to make good on a promise to bring in shipments of US-supplied humanitarian aid. Maduro still holds the levers of power in Venezuela, and America’s attempts to dislodge him have fallen flat.

Guaido is still in Colombia, and Abrams warned of a “very large reaction” if he were to be harmed by Venezuelan authorities upon his eventual return.

Abrams went on to Russia and China for blocking a US resolution at the United Nations Security Council that would have blamed Maduro for causing “economic collapse” in Venezuela and called for new elections.

The envoy – best known for using aid shipments to ferry arms to right-wing Nicaraguan rebels in the 1980s, and for defending despotic regimes in El Salvador and Guatemala – called a counter-resolution by Russia urging a political solution “pathetic.”

With UN support ruled out, sanctions remain the US’ primary weapon against Maduro. The Treasury Department sanctioned six Venezuelan security officials earlier on Friday, whom it said were “obstructing” humanitarian aid deliveries last weekend. The State Department also revoked the visas of “dozens” of Maduro associates in the United States, Abrams said during the briefing.

However, Abrams could not reveal more about the visa revocations, and could not reveal whether the US had talked any other countries into imposing sanctions on Venezuela. All the envoy could do was remind the press that the US will “continue to take appropriate action against Maduro,” whatever that may be.