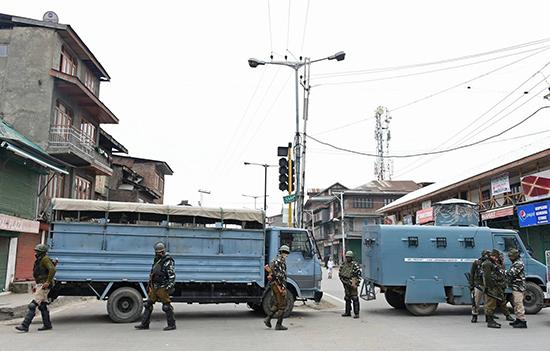 Indian paramilitary troops in Srinagar in Kashmir this month. Sixty-eight percent of the army’s equipment is so old that it is officially considered “vintage.”CreditCreditTauseef Mustafa/Agence France-Presse — Getty Images

NEW DELHI — It was an inauspicious moment for a military the United States is banking on to help keep an expanding China in check.

An Indian Air Force pilot found himself in a dogfight last week with a warplane from the Pakistani Air Force, and ended up a prisoner behind enemy lines for a brief time.

The pilot made it home in one piece, however bruised and shaken, but the plane, an aging Soviet-era MiG-21, was less lucky.

The aerial clash, the first by the South Asian rivals in nearly five decades, was a rare test for the Indian military — and it left observers a bit dumbfounded. While the challenges faced by the India’s armed forces are no secret, its loss of a plane last week to a country whose military is about half the size and receives a quarter of the funding was still telling.

If intense warfare broke out tomorrow, India could supply its troops with only 10 days of ammunition, according to government estimates. And 68 percent of the army’s equipment is so old, it is officially considered “vintage.”

“Our troops lack modern equipment, but they have to conduct 21st-century military operations,” said Gaurav Gogoi, a lawmaker and member of the Parliamentary Standing Committee on Defense.

American officials tasked with strengthening the alliance talk about their mission with frustration: a swollen bureaucracy makes arms sales and joint training exercises cumbersome; Indian forces are vastly underfunded; and the country’s navy, army and air force tend to compete rather than work together.

Whatever the problems, the United States is determined to make the country a key ally in the coming years to hedge against China’s growing regional ambition.

Last year, when Defense Secretary Jim Mattis announced that the Pentagon was renaming its Pacific Command — to Indo-Pacific — he emphasized India’s importance in a shifting world order.

“It is our primary combatant command,” said Mr. Mattis, who left the Pentagon at the end of the year. “It’s standing watch and intimately engaged with over half of the earth’s surface and its diverse populations, from Hollywood to Bollywood.”

The American military began prioritizing its alliance with India as its close relationship with Pakistan soured over the last two decades. United States officials are concerned that Pakistan is not doing enough to fight terrorism, a charge the country denies.

In just a decade, United States arms sales to India have gone from nearly zero to $15 billion. But Pakistan can still draw on a powerful American-supplied arsenal.

Indian officials say Pakistan used one of its F-16 fighter jets to down its MiG-21 last week. Islamabad rejected the claim, but on Sunday the American Embassy in Islamabad said the United States was looking into the report. The offensive use of an F-16 warplane against its neighbor might have been a violation of the sales agreement.

“We are aware of these reports and are seeking more information,” the embassy said in a statement. “We take all allegations of misuse of defense articles very seriously.”

However troubled its military, India holds an obvious strategic appeal to the United States by virtue of both its location and its size.

India will soon become the world’s most populous country, on track to surpass China by 2024. It shares a long border with southern and western China and controls important territorial waters Beijing needs for its maritime trade routes.

All that can help the United States try to box in its rival.

“India’s sheer demographics, its long-term military potential, its geographic expanse — it makes India worth waiting for,” said Jeff Smith, a research fellow for South Asia at the Heritage Foundation in Washington and the author of “Cold Peace: China-India Rivalry in the 21st Century.”

“As China rises and the United States fights to keep its dominance, it will need a swing state to tip the balance of power in the 21st century,” Mr. Smith said. “And that swing state is India. The United States knows this and is willing to be patient.”

It is not just a question of how much India spends on its military, but how it spends it.

The majority of the money goes to salaries for its 1.2 million active duty troops, as well as pensions. Only $14 billion will be used to buy new hardware.

“At a time when modern armies are investing hugely on upgrading their intelligence and technical capabilities, we need to be doing the same,” said Mr. Gogoi, the Parliament member.

Unlike China, where an authoritarian government is free to set military policy as it wishes, India is a democracy, with all the messiness that can entail.

Cutting troop levels so that the military can spend the money on buying modern equipment is not so simple. India’s military has long been a source of jobs for a country struggling with chronic underemployment. That is likely to be a big issue in elections scheduled for later this spring.

Prime Minister Narendra Modi won elections in 2014 promising to reform the economy and provide the one million jobs needed each month to satisfy its growing work force. But with elections around the corner, Mr. Modi has shelved promises of economic reform and embraced the usual populist measures.

“The thrust of this government is to focus more on economic development, which has to precede military strength,” said Amit Cowshish, a former defense ministry financial adviser for military acquisitions. “That was what China did — they focused on developing their economy and then focused on acquiring their current military stature. The difference is that China started 20 or 30 years ahead of us in terms of economic liberalization.”

Government officials in New Delhi say they are struggling to improve the lives of their citizens in the most basic of ways — dealing with high illiteracy rates and poor sanitation infrastructure, as just two examples — making it hard to funnel more money toward the military at a time when China is making incursions into India’s backyard by land and sea.

China has significantly outpaced its rival, creating a robust and taxable middle class. China’s economic boom has allowed it to invest aggressively in buying top military hardware and producing it at home.

As the world’s conflicts are increasingly fought with state-of-the-art weaponry rather than the large invading armies of the past, India is falling behind. Despite being the fifth-largest military spender, only about a quarter of its military budget this year will purchase new equipment.

Although the purchase of military hardware is a slow-moving process in most countries, in India it moves even more sluggishly amid a swollen bureaucracy.

There are also concerns about corruption.

Mr. Modi is currently being grilled by the opposition over a murky $8.9 billion deal to buy 36 Rafale fighter planes from France. His political opponents have cast the agreement as corrupt in an effort to discredit him ahead of elections.

The purchase will help India replace its aging fleet of MiG-21s and other jets. And on Saturday, the prime minister tried to turn the tables on the opposition, saying India would have fared better in its skirmish with Pakistan last week if it had had the Rafale jets.

“The country has felt the shortage of Rafale,” Mr. Modi said.