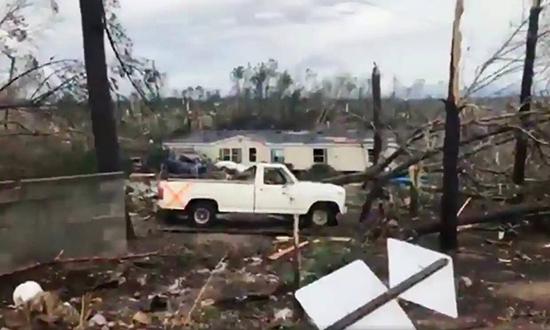 At least 23 people, including children as young as six, have been killed and more are missing after at least two tornadoes struck in Alabama on Sunday, causing “catastrophic” damage, a county sheriff has said.

Crews searched a trail of destruction several miles long before pausing efforts overnight as conditions became too dangerous, Lee County Sheriff Jay Jones said. “The challenge is the sheer volume of the debris where all the homes were located,” Jones told CNN. “It’s the most I’ve seen that I can recall.”

East Alabama Medical Center said it had received more than 40 patients as a result of the tornado and more were expected. The county coroner, Bill Harris, said none of the victims had been formally identified yet but believed the youngest victim was six.

He told how firetrucks were drafted in to take victims out of the danger zone unreachable by ambulances and that he had to use his paramedic skills at the fire station under more help arrived.

“This is a day of destruction for Lee County, we’ve never had a mass-fatality situation that I can remember like this in my lifetime,” Harris said. Some areas were still inaccessible, he added, suggesting the death toll could still rise.

Sunday’s destruction was caused by a severe weather system that crossed the US south-east in the afternoon, sparking tornadoes as it headed towards the Atlantic seaboard.

Donald Trump urged people in the region to stay safe, tweeting that the tornadoes and storms “were truly violent and more could be coming”.

Earlier, Harris, when confirming two deaths in Beauregard, Alabama, said: “We’ve still got people being pulled out of rubble. We’re going to be here all night.”

Rita Smith, a spokeswoman for Lee County Emergency Management Agency said: “We’ve got about 150 first responders out there. They are doing a phenomenal job. Sadly, we know that we have two known confirmed fatalities and many, many injuries.”

She said multiple homes had been destroyed or damaged in Beauregard, a community about 60 miles (95km) east of Montgomery, the state capital.

The East Alabama Medical Center in Opelika said in a statement that it was treating more than 40 patients as a result of the tornado and expects to receive more. Some patients have been sent to other hospitals, it added.

The storm has left more than 10,000 customers without power, the Birmingham News reported, and temperatures looked set to fall to near freezing overnight. “Colder air will sweep into the south-east behind the severe weather with temperatures dropping into the 30s [1C] southward to central Georgia and across most of Alabama by Monday morning,” AccuWeather meteorologist Kristina Pydynowski said. “Those without power who rely on electric heat need to find ways to say warm.”

Televised broadcast news footage showed smashed buildings with rooftops blown away, cars overturned and debris everywhere. Trees all around had been snapped bare of branches.

The National Weather Service said it had confirmed a tornado by radar that toppled trees in a Florida Panhandle county, halting traffic on a stretch of Interstate 10 in one direction because of debris.

Meteorologist Don Harrigan with the Tallahassee office of the weather service said the tornado hit about 5.45pm on Sunday in Walton County and other tornadoes had been confirmed on radar in Geneva County in south-east Alabama, just across the line from north Florida, and in Henry County, Alabama.

Harrigan said a squall line moving across the south-east was entering an area of strong, low-level winds conducive to forming tornadoes. He said the threat of more tornadoes would continue for several hours as the storm system headed toward the Atlantic seaboard.