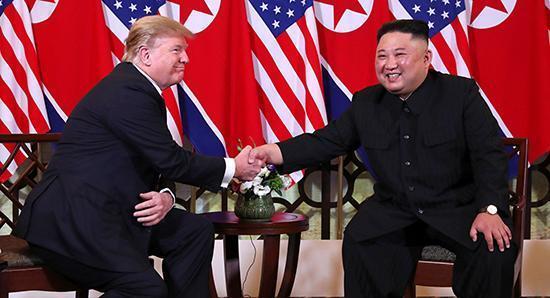 The Vietnam summit showed just how high the price of denuclearization will be.

Donald Trump’s summit with Kim Jong Un collapsed not because the parties couldn’t agree on how North Korea would get rid of its nuclear weapons altogether, but over something far more modest: the price for preventing Pyongyang’s arsenal from becoming even deadlier.

Administration officials insisted that the aim in Vietnam this week was “the final, fully verified denuclearization of North Korea,” and that’s true in the long term. But for the time being, they actually seem to be negotiating the conditions under which the United States can live with a nuclear-armed North Korea. It’s quite a comedown for Trump, who once boasted that his personal diplomatic touch had prompted Kim to start “de-nuking the whole place.”

The North Koreans were prepared to make some concessions; they just wanted a lot in return. At the summit, as officials from both countries have acknowledged, the North Koreans offered to verifiably dismantle part of their Yongbyon nuclear complex in exchange for lifting the five most recent rounds of United Nations Security Council sanctions.

Yongbyon has been the centerpiece of North Korea’s nuclear-weapons program since the 1990s and produces various forms of fuel for nuclear bombs. Coupled with Kim’s suspension of nuclear and missile tests last spring, shutting down the facility would have curbed Pyongyang’s progress in developing the sophisticated nuclear weapons that pose the greatest danger to the United States.

Yet even if the complex had been rendered entirely inoperable—an if the size of the vast Yongbyon Nuclear Scientific Research Center—that would have still left Kim with ballistic missiles, nuclear warheads, and other suspected sites for producing nuclear material (not to mention chemical and biological weapons). And while Trump was exaggerating on Thursday when he claimed that the North Koreans wanted to trade Yongbyon for relief from “all of the sanctions,” he wasn’t far off. The UN Security Council resolutions they singled out represent, as the Korea expert Frank Aum put it, “the heart of the sanctions regime,” which if removed would allow North Korea to “function relatively well while still keeping its nukes.”

“The dilemma that we were confronted with is, the North Koreans at this point are unwilling to impose a complete freeze on their weapons-of-mass-destruction program,” a senior State Department official, speaking to reporters on condition of anonymity, explained after the summit. “To give many, many billions of dollars in sanctions relief would in effect put us in a position of subsidizing the ongoing development of weapons of mass destruction in North Korea.”

Asked whether Washington and Pyongyang had yet arrived at a common definition of “denuclearization,” the State Department official admitted that the North Koreans “haven’t agreed to it.”

When the Trump administration first elected to engage North Korea diplomatically last spring, it hewed to a hard line in word if not always in deed: that North Korea quickly and comprehensively give up its nuclear weapons in order to receive sanctions relief and other benefits.This hawkish position, however, contained a problematic contradiction. It is premised on skepticism that North Korea’s leaders will really denuclearize, and yet it demands that those leaders act as if they’re really denuclearizing.

In the lead-up to Hanoi, having secured no verified steps toward denuclearization since the first Trump-Kim summit in Singapore last summer, the administration softened its stance. Trump now likes to say that he’s “happy” and “not in a rush” so long as Kim isn’t testing nuclear bombs and ballistic missiles. Pompeo has repeatedly referred to the need to “reduce the threat from a nuclear-armed North Korea” rather than do away with it. His North Korea envoy, Stephen Biegun, has been consulting with experts who advocate a phased approach to negotiations, in which Pyongyang’s nuclear program is first halted, then rolled back, and at some point—hopefully!—eliminated.

These proposals are designed to mitigate the threat that North Korea’s nuclear weapons pose and reduce the risk of war, while probing just how far Pyongyang will go in relinquishing its nuclear weapons. (They also explore the extent to which the U.S. is prepared to make corresponding concessions.)

“Any process of [North Korean] denuclearization is going to be more complex than has ever been done in the nuclear field,” George Perkovich of the Carnegie Endowment for International Peace, who has communicated with Biegun about his Carnegie team’s phase-by-phase approach, told me shortly before the Vietnam summit. “Nobody has ever built an arsenal like North Korea has, with nuclear weapons, the fissile material, the delivery systems … and then relinquished it. It’s very difficult to relinquish quickly even if one wanted to, which they’re not going to want to.” The road map he has in mind, he explained, is essentially “arms control to facilitate movement towards eventual disarmament.”

If the United States can take the North Korean program “from something that’s expanding quantitatively and qualitatively to something that is capped” with an aspirational commitment to denuclearization, it would be a good outcome, Perkovich explained.

Siegfried Hecker, a nuclear scientist whose team at Stanford is in touch with Biegun as well, has developed another step-by-step framework for North Korean denuclearization that could stretch for at least a decade. “Will [the North Koreans] eventually eliminate nuclear weapons? I don’t know,” Hecker told me earlier this week. “But it’s time we take steps to find out. Quite frankly, Kim Jong Un may not know for sure either. It will depend on how we respond to his actions.”

For now, the Trump administration has to set its sights on more modest matters like simply reviving talks. “We’ll each need to regroup a little bit,” saidSecretary of State Mike Pompeo. “There has to be a reason for the conversations.”

That it has come to this point isn’t necessarily a sign that the Trump administration has caved in its dealings with Kim. Instead, it’s an indication that the administration is reckoning with the reality of what it inherited: a North Korea that already possessed nuclear weapons and was in the midst of fine-tuning its capacity to place the entire world in its crosshairs.

“This is, after all, what nuclear weapons do,” the arms-control expert Jeffrey Lewis wrote after the Vietnam summit. “They trap us together with our enemies, like scorpions in a bottle, creating a shared danger that compels us to work together to advance our mutual interest in survival.”