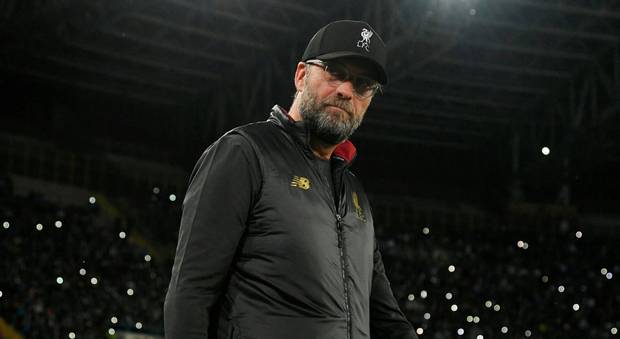 Jurgen Klopp may have blamed the wind at Goodison but he insists Liverpool haven’t blown their title chances as he denied his team were losing their nerve after losing the Premier League lead to Manchester City.

A frustrating 0-0 draw at Everton means City lead the league by a point with nine games left to go, but Klopp insists there is still all to play for.

The Liverpool boss took issue with a reporter who asked if he regretted not going for the “jugular more” after the Reds missed the chance to reclaim top spot in the Premier League.

Klopp also cited the weather, specifically the wind, among the reasons for his side’s failure to claim a victory at Goodison Park that would have taken them a point above champions Manchester City.

Klopp said: “We don’t play PlayStation. Do you think we didn’t take enough risks today? Is that what you want to ask?

“That’s a really disappointing question, I have to say, because that means it’s like it’s so easy.

“Is there any draw we didn’t try to win? What is that? An extra attacker just to go wild nine matchdays (from the end)?

“You think it’s PlayStation – bring an extra attacker and football changes. It’s not like that. We are offensive enough, football doesn’t work like that. There are nine games to go, we don’t lose our nerve – like you, obviously.

“There’s not a moment where we say, ‘come on now, throw everything in that direction’. You cannot play in the Premier League like that.

“We take all the risks, but you cannot take more than 100 per cent risk, going nuts. It’s not about that.”

Klopp laid some of the blame for the draw at the hands of Mother Nature, with the windy conditions at Goodison hampering his side’s attempts at playing football the way he likes.

Klopp said: “A difficult game, opponent, and the weather circumstances didn’t help for football in general. It was just a fight. We were ready for that today and now we have a point more than before – all good.

“The wind does not help and there was a lot today. We had five or six big chances but Jordan Pickford or a defender was in between.

“I don’t think they had a real chance. Not perfect, but good enough. Getting a point from Everton is always a success because it is our most difficult away game of the season.

“The good news is that we are in a fight,” Klopp added. “That is really good news.

“What’s even better is that we are prepared for it. We have to play a lot of games, we are stable, we are there.

“Who wants to be top of the table at the beginning of March? It is nice but there are lots of games to play.”

Asked if he needed to tell his players not to panic, Klopp said: “I don’t think I have to give my players that advice because they know it already.”

Liverpool had three shots on target out of a total of 10 attempts during the 90 minutes and Everton boss Marco Silva was pleased with the way his side restricted the visitors.

“The match was really tough, like we expected,” he said. “They had a big chance with Salah in the first half after one moment when we lost the ball, not something they created because they didn’t create big moments to score.

“We didn’t give them a chance to create anything and in the second half we should have had more chances to score.

“We wanted to give our fans the three points but we couldn’t. When you cannot win you cannot give a chance for our opponent to win and a clean sheet is important for us.”