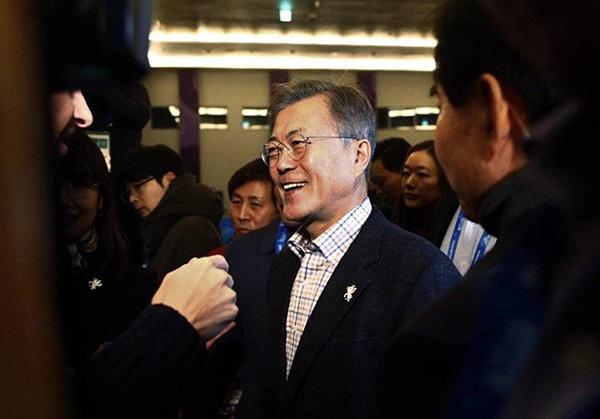 SEOUL (AP) — South Korean President Moon Jae-in said Monday that Seoul will actively try to get the nuclear negotiations between Washington and Pyongyang quickly back on track.

Moon made the comments as he led a National Security Council meeting in Seoul to discuss South Korea’s diplomatic strategy following the breakdown of a high-stakes summit between U.S. President Donald Trump and North Korean leader Kim Jong Un last week in Vietnam, which placed the pressure on Moon to broker progress once again.

Moon lobbied hard for the revival of nuclear diplomacy between Washington and Pyongyang following the tensions of 2017 over the North’s missile and nuclear tests and Trump’s threats to bring down “fire and fury” on the North. But some experts say the breakdown of the Trump-Kim meeting in Hanoi has raised further doubts about Moon’s claim that Kim is genuinely interested in dealing away his nukes and about Moon’s role as mediator.

“We hope that both countries will continue their dialogue and that their leaders meet again quickly to reach an agreement that was held off this time,” Moon said in a Blue House meeting that was attended by his prime minister, spy chief and ministers of foreign affairs, defense and inter-Korean affairs.

“In the process, our role has become important once again,” Moon said. “While I believe the United States-North Korea negotiations will eventually reach an agreement, it’s never desirable for a vacuum in dialogue or stalemate to prolong,” he said, urging South Korean officials to find ways so that Washington and Pyongyang can narrow their differences.

Moon said Seoul will continue to push ahead with inter-Korean engagement within the boundaries of U.S.-led international sanctions against the North. Moon has prioritized stabilizing bilateral relations with the North amid the larger nuclear negotiations between Washington and Pyongyang, saying inter-Korean reconciliation will drive nuclear progress. But his call for partial sanctions relief to induce nuclear disarmament steps from the North has caused disagreements with Washington, which sees economic pressure as its main leverage with Pyongyang.

Moon helped set up the first meeting between Trump and Kim last June when they agreed to a vague aspirational statement about a nuclear-free Korean Peninsula without describing how and when it would occur. Trump and Kim’s second summit last week collapsed over what the Americans saw as excessive North Korean demands for sanctions relief in exchange for limited disarmament steps.

Still, Washington and Seoul are committed to keeping an atmosphere of dialogue alive and announced on Sunday that they would be eliminating their massive springtime military drills and replacing them with smaller exercises in what they call an effort to support diplomacy with Pyongyang. The allies on Monday began a new training, a computer-simulated exercise dubbed “Dong Maeng,” the Korean word for “alliance,” which runs until next Tuesday.