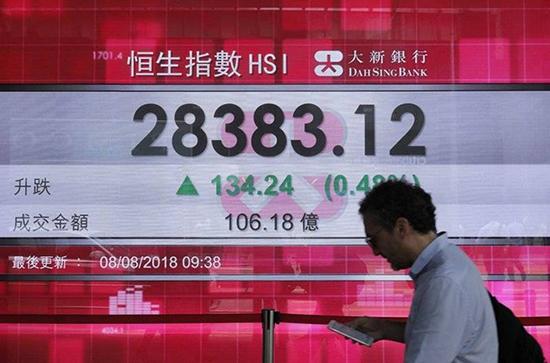 SYDNEY (Reuters) – Asian shares started the week on the front foot on signs the United States and China were close to striking a tariff deal to end their protracted trade war while the dollar eased as traders wagered Federal Reserve policy would remain accommodative.

The Wall Street Journal reported on Sunday Washington could lift most or all of its tariffs on Beijing while a summit between U.S. President Donald Trump and his Chinese counterpart Xi Jinping to sign a final trade deal could happen later this month.

That followed comments from Trump last week that he had asked China to immediately remove all tariffs on U.S. agricultural products because trade talks were progressing well. He also delayed previously scheduled plans to impose 25 percent tariffs on Chinese goods.

All of that proved positive for risk sentiment with E-mini futures for the S&P500 and the Dow rising 0.5 percent each on Monday.

That left MSCI’s broadest index of Asia-Pacific shares outside Japan with gains of 0.4 percent. Japan’s Nikkei strengthened more than 1 percent.

The Asia ex-Japan index has risen almost 10 percent so far this year.

“Following a robust recovery for risk assets since the start of the year, a number of events in March are going to set the tone for global investors on whether this rebound is sustainable,” said Tai Hui, Asia Pacific Chief Market Strategist at JPMorgan Asset Management.

“These policies will be influential to maintain the upbeat onshore sentiment that has driven a strong rebound in the A-share market,” Tai said.

March is expected to be a crucial month for global markets with UK parliament voting on Britain’s exit from the European Union while the Fed holds its policy meeting, which could yield clues on plans for future rate hikes and balance sheet reduction.

“While it will take time for economic data to stabilize from the current slowdown, policy shifts by central banks and governments, especially in the U.S. and China, should help support investor confidence for now,” Tai noted.

A slew of surveys has highlighted how much manufacturers are suffering worldwide, particularly those exposed to China’s slowdown, and added to expectations that central bank policy tightening is as good as finished.

In the United States, ISM data showed manufacturing activity for February dropped to its lowest since November 2016, while the University of Michigan survey showed consumer sentiment fell short of expectations in the month.

The dollar index slipped against a basket of major currencies from Friday’s one-week high of 96.551. It was last down 0.1 percent at 96.45.

Against the Japanese yen, the dollar was a tad higher at 111.98.

The Australian dollar, a liquid proxy for risk hedges, gained on the broader improvement in sentiment but disappointing domestic data took the wind out of its sail. The currency was last at $0.7089 after earlier rising as high as $0.7118.