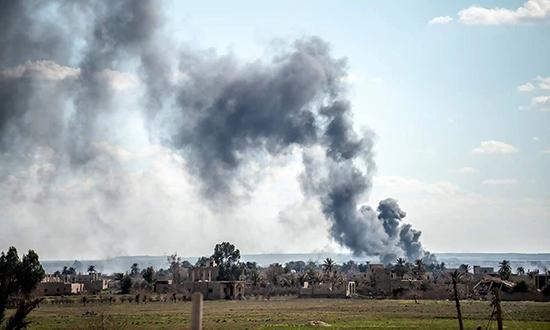 The US-led coalition is making up for lost time in the fight to drive Isis out of Baghuz, its last stronghold

Bethan McKernan and Mohammed Rasool in Baghuz, Syria  -The Guardian

There is a flash of light in the dark town as an airstrike hits an Islamic State weapons depot. A few seconds later, a ball of flame engulfs the entire neighbourhood. The sonic boom sends shockwaves through Baghuz, shaking the ground miles away, and for a second everything and everyone is stunned into silence. Then the artillery fire starts up again.

Five years after Isis swept across Syria and Iraq, all that remains of the “caliphate” that at its peak stretched across two countries and controlled 10 million people is a handful of streets in a bend of the Euphrates river running through this desert town, which will be retaken in the next few days.

Trapped from the east and the west by advancing Kurdish-led Syrian Democratic Forces (SDF) and by the Syrian regime and Russia on the other side of the river, the caliphate is a hellscape of smoke and fire. There is nowhere left for the fighters to go.

The US-led coalition is making up for lost time in the fight to drive Isis out of its last stronghold. After a 10-day truce to evacuate women and children from the town, the offensive restarted this weekend at a tempo not seen even in the major battles for the cities of Mosul and Raqqa.

Isis snipers, suicide bombs and heat-seeking rockets are preventing the SDF from making gains on the ground during daylight. But when darkness falls, Isis is hampered without night vision goggles, and for the past two nights US jets and helicopters have attacked. At least 160 machine guns are stationed at 50-metre intervals along the frontline, the gunfire echoing across the area.

After darkness fell on a rooftop position near the front on Saturday, bright red tracers and sparks from mortar and artillery fire illuminated palm trees and rubble. Thick clouds of smoke blocked out the sky.

“The day is their time. But the night is for us,” said Memo Wan, an SDF commander, as his men whooped and cheered at every explosion. One of the unit was killed by an improvised explosive device (IED) planted by Isis a few weeks ago.

In the past two days, the SDF have managed to close the remaining gap of 1km between Isis and their own positions, and Wan said the militants were now almost totally besieged, with all but one supply line cut.

“We have picked up walkie talkies dropped by retreating fighters and listened to them panicking and talking about how to escape,” he said. “From the accents, many were Iraqi and other foreigners.”

Between 1,000 and 1,500 men are believed to be still inside the riverside pocket, along with an unknown number of women and children. The SDF believes senior fighters may be trying to bribe the regime for passage into Abu Kamal on the other side of the Euphrates.

“We were only expecting 2,000 people to leave during the evacuations, but it was more than 9,000 women and children in the end, so it could be there are more fighters left than we think,” said commander Adnan Afrin. “This battle has been extremely difficult because so many will fight to the end.”

Current intelligence suggests that high-profile hostages are still being held in Baghuz as bargaining chips. Also trapped in the town are two American children, Yusuf and Zahra Shikder, whose mother died in an airstrike in January and who are now believed to be in the custody of a British family that has chosen to die in the battle for the town.

Those who were able and willing to leave Baghuz did so over the past two weeks, walking for hours or reaching SDF checkpoints where they were put in vehicles normally used for transporting sheep and taken to prisons or displacement camps.

On Friday the last hundred or so people to flee the pending fighting were screened in the middle of the desert by SDF troops. Among them were three teenage boys who had been made to fight: weak with hunger, they fell upon bread provided by their captors.

Small children kept close to their mothers, their noses, hands and in some cases bare feet turning blue in the biting desert wind. Their faces wore no expressions. Most did not cry.

A handful of men tried to pass as civilians. A tall Bosnian fighter ignored questions, closing his eyes and smiling serenely before wincing and falling over. Medics said he had not eaten for days and an old wound on his torso had reopened.

Even though some of its last fighters are children or injured, Isis is refusing to go quietly from its last redoubt. In the first 24 hours of the renewed campaign, snipers and IEDs killed three SDF soldiers and injured another seven. Soldiers said they had seen through binoculars that women with guns were now among those fighting, and that two female suicide bombers had attacked in the last month.

The jihadists have turned to suicide attacks using cars, motorbikes and even bicycles, also lacing the tunnels they are using to hide in with IEDs. According to commanders of the operation, the group is continuing to use civilians as human shields against airstrikes.

While the SDF closed in on the jihadists in the east of the country, across in the north-west near Idlib 21 Syrian soldiers and allied militiamen were killed by a separate group linked to al-Qaida, in one of the deadliest breaches of a six-month-old truce deal. Sunday’s attack by Ansar al-Tawhid fighters was carried out in the village of Massasneh, in the north of Hama province, according to the Syrian Observatory for Human Rights. The attack was confirmed by the Syrian foreign ministry.

In Baghuz, at the rooftop position commanded by Wan, walkie talkies crackled as news filtered through of an incoming new casualty from the front 400 metres away.

On Sunday morning, both in Baghuz’s outskirts and at a hilltop position above the town, the extensive damage from airstrikes and shelling could be clearly seen. A car bomb had ploughed into the gate of a mosque, bringing down the building’s dome.

Yellow spring flowers and new blossom on trees were covered in white rubble dust, and at one house charred pomegranates, never picked, were left to rot on the branch.

Artillery thuds and machine gunfire drowned out the springtime birdsong. The fire from the previous night’s airstrike on the weapons depot was still burning, sending columns of black smoke into the blue desert sky.