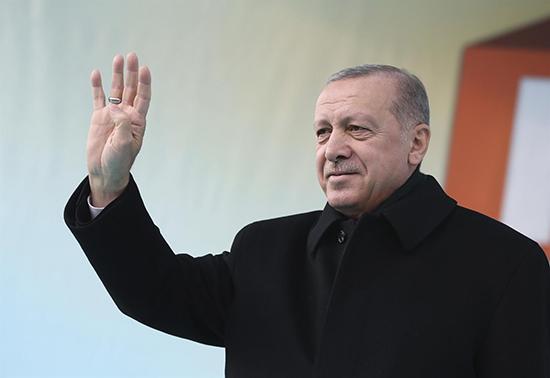 “Otherwise, we cannot provide a sustainable solution for the matter of Syria,” he said speaking at a rally in the Black Sea province of Ordu.

Turkey’s future, on a large scale, depends on how the Syrian issue will be resolved, he said noting that neither Turkey nor Europe will be in peace if the matter is not resolved in a way that provides the security of Turkish border, Syrian people’s peace, security and prosperity.

The Turkish government has realized that security and peace of Syrian territory near its border should be provided by Turkey so that a solution could be achieved, he stated.

Erdoğan was referring to a long promised military incursion into northern Syria against the presence of the YPG group there, which Ankara assumes as the Syrian branch of the illegal PKK.

Erdoğan recalled that Turkey has a 911-kilometer border with Syria, a line longer than any other country. “No other country has this much of a border there. So who will provide our security, Russia or Iran? We will achieve that,” he said adding that necessary measures are being taken to this end.

The president reiterated the necessity of fulfilling requirements of the Manbij deal with the US which envisages withdrawal of the YPG members there.

Turkey will defeat terrorism both inside the country and abroad, said Turkey’s national defense minister on March 2.

Terrorists inside the country were largely neutralized, Hulusi Akar told a group of veterans and martyrs’ families in the eastern Ağrı province, adding that Turkey is committed to putting an end to them.

“We will not allow any terrorist corridor in northern Syria,” said Akar, referring to the YPG/PKK, which Turkey has promised to mount an operation against.

“The whole world knows that.”

There must be Turkish soldiers in this corridor for the nation’s security, he added.

Akar also said that Turkey completed preparations against targets in Manbij, Syria and east of Euphrates.

Turkey has vowed to carry out a counter-terrorist operation in Manbij, Syria and east of Euphrates following two similar successful operations since 2016.

“Turkish army will not endanger our country in any case,” he added.

The PKK is listed as a terror group by the U.S., European Union and Turkey. The YPG is its Syrian branch.