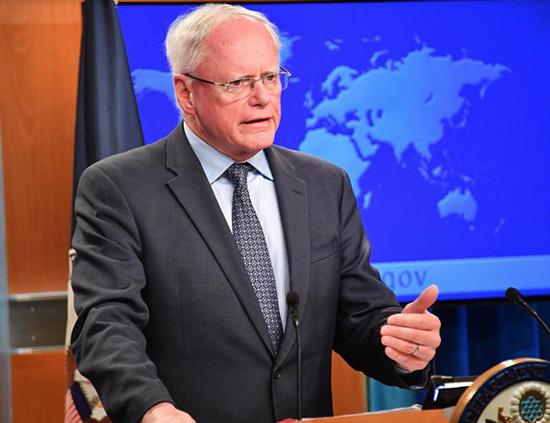 Deputy Assistant Secretary Matthew Palmer and James Jeffrey, the United States Special envoy for Syria who also assumed the role of U.S. Special Envoy to the Global Coalition against ISIL will hold talks in Ankara.

Palmer has arrived in Turkey and may have meetings until March 6, diplomatic sources told Hürriyet Daily News on condition of anonymity. Palmer is expected to focus on the issue of Turkey’s procurement of Russian air defense systems and the sale of US Patriot systems to Turkey.

Jeffrey will arrive Ankara on late March 4 and his talks will focus on Syria, particularly on Manbij deal and the U.S. plans to withdraw from the war-torn country. Turkey and the U.S. agreed on last year in June over a road map for the withdrawal of all YPG troops from Manbij to the east of Euphrates and for the establishment of a new city council by the local Arabs.

Turkey has long been criticizing the U.S. for prolonging the process.

In the past few weeks, Washington has been carrying on with a silent diplomacy for its accelerated pressure on Ankara for the cancellation of the S-400 deal. In February, U.S. Vice President Mike Pence conveyed the U.S.’s concerns to Ankara on behalf of President Donald Trump and asked Turkey to abort its S-400 purchase.

The U.S. warns that the Russian S-400 defense systems would jeopardize Turkey’s participation in the F-35 Joint Strike Fighter project.

“We are very concerned that the Turkish purchase of the S-400 missiles will endanger Turkish participation in the F-35 program and will likely result through our legislation in some sort of sanctions coming through the legislations called CAATSA [the Countering America’s Adversaries Through Sanctions Act],” a senior U.S. official told the Hürriyet Daily News on condition of anonymity.

“So the U.S. government is of the view that we will not proceed with the Patriot sale if Turkey proceeds with the S-400 purchase,” the official has added.

On Jan. 3, a U.S. delegation formally made an offer to Turkey for the sale of Patriot systems. The U.S. put an informal deadline of Feb. 15 for Ankara to respond to its offer on the Patriot systems.