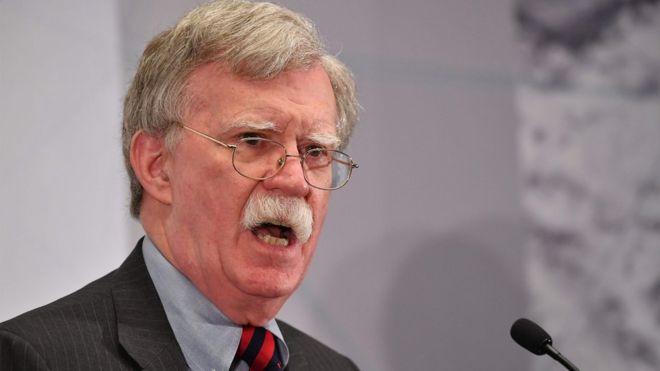 Russia  Today
National Security Adviser John Bolton said that the United States will form “as broad a coalition” as possible to oust Venezuelan President Nicolas Maduro. Bolton went on to call for a “completely democratic hemisphere.”

“I’d like to see as broad a coalition as we can put together to replace Maduro, to replace the whole corrupt regime,” Bolton told CNN’s Jake Tapper on Sunday. “That’s what we’re trying to do.”

Within hours of Venezuelan opposition leader Juan Guaido declaring himself interim president in January, the Donald Trump administration threw its support behind the self-declared leader. While several Latin American countries followed the US line, efforts to drum up international support against Maduro have thus far proven unsuccessful. A US resolution condemning Maduro and calling for fresh elections in Venezuela was defeated at a meeting of the United Nations Security Council last week, and Maduro remains in control.

Still, Bolton told Tapper that the US is not afraid to go it alone. “In this administration we’re not afraid to use the phrase ‘Monroe Doctrine,’” he said. “This is a country in our hemisphere and it’s been the objective of American presidents going back to Ronald Reagan to have a completely Democratic hemisphere.”

The ‘Monroe Doctrine’ was the name given to the US policy of opposing European influence in the Western hemisphere, outlined by President James Monroe in 1823. Since then it has been invoked by John F. Kennedy and Ronald Reagan to oppose the spread of Communism to Cuba, and drum up support for right-wing Contra rebels in Nicaragua.

Bolton is not the only hardliner in Washington to use similar language to describe the situation in Venezuela. Senate Armed Services Committee chair Jim Inhofe (R-Oklahoma) said last month that the US might have to invade Venezuela if Russia dares set up a military base there or “anywhere in our Hemisphere.”

Russia has not set up a base in Venezuela, nor does it have plans to. In the meantime the Trump administration has done everything to aid Guaido, but stopped short of military intervention. Nevertheless, US envoy Elliott Abrams – famed for his role running guns to the Contras in the early 1980s – told reporters on Friday that “all options are on the table.”

Guaido himself is currently in Colombia, and plans on returning to Venezuela on Monday. The opposition leader has called for massive anti-government protests to accompany his return.