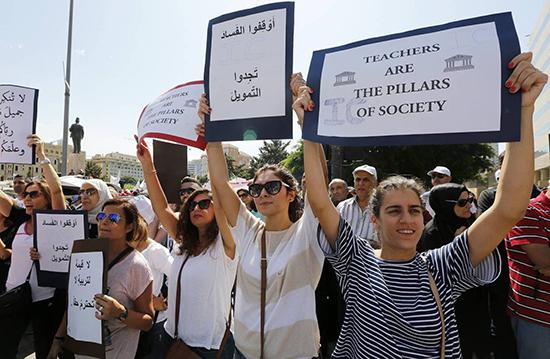 We’ve been programmed not to hold ministers accountable

One of the crazy things about the Lebanese political system are the announcements by ministers and officials warning about the gravity of the political and economic situation.

We’ve now been programmed not to expect them to provide us basic services, like paved roads, that don’t flood every time it rains, or potable water in our taps, or 24-hour electricity. We’ve been programmed not to hold them accountable, despite the fact that the average minister or deputy earns a taxpayer-provided salary ten times that of the average Lebanese citizen. Thus, they get paid this high salary as a generous gift from you, the taxpayer to them.

But there’s one thing I don’t get, like the announcement by a senior minister last week, that if we don’t take action soon, we will lose the country. At first, I felt guilty. I felt worried. I got up and looked around. What did I forget to do? Then it hit me. Wait a minute. I don’t have any position of authority in the government. Isn’t that his job?

When I first went to graduate school in the United States, my biggest goal was to try to become financially independent. I won’t give you that cliché sob story about how I went with $100 in my pocket, then had to wait tables and work nights as a bartender to support myself. It wasn’t that bad. My family wasn’t wealthy, especially, in those days, when my dad was recovering from our losses and refugee-status during the war, but he had shuffled together some funds, enough to cover my first-semester tuition, plus a few months of living expenses, allowing a basic, frugal existence.

I saw an ad for a lab job, that required some heavy Chemistry. All the Chemistry I knew had been taught to me in a couple of courses at AUB by Professors Mary Kasparian and Costas Issidorides — outstanding professors, but certainly wasn’t enough expertise to call myself a chemist. Nevertheless, in characteristic Lebanese optimism, I applied for it. Nobody was more surprised to get the job than me. It didn’t make me rich, but included my university tuition plus a small stipend, that made me independent from financial support by my parents.

The thing is, I got the job with no connections. Nobody calling somebody from a certain political party on my behalf. In fact, as a foreigner, I wouldn’t have been surprised if they didn’t give it on that basis alone. But I got it with no wasta. And this was my first foray into the world of fair play and meritocracy.

The problem is that this wasta thing is ingrained in our blood. When I went back to Lebanon for my first visit after this incident, I told one of my close relatives the story, and asked: “What if we can have a Lebanon like this?” Her answer was, “But the personal touch is nice.”

What is this personal touch? It is the fact that we measure the performance of a minister or a deputy by the services (“khadamet”) that he performs on behalf of his constituents. Maybe getting someone a job without his heaving to show up to work, or speeding up paperwork through the system, or getting him a permit to do something he’s not supposed to do (with some bribes along the way). Normally, these services in a properly functioning country are your rights as a citizen and a taxpayer.

Another time, I was having a heated argument with a friend of mine about the corruption of one of the ministers. I was expecting her to deny that he was corrupt and the discussion would turn into a debate about the facts in evidence, except she didn’t. Her answer was that this other sect had been stealing for years, so it’s OK for him to steal because “it was now our turn.” Apparently, she felt she was personally gaining if the leader that was representing her was getting illegally enriched.

In my home town, I’m told we have 45 municipal employees, only 9 of whom show up to work. I asked a friend of mine on the municipal council why that is. He said it’s a form of social welfare. Haram, these 36 guys who get paid without showing up need the money to support their families. Well, why don’t we set up a welfare or charity system to support them? Maybe they’re not even the neediest. He said that it would damage their ego and self-respect if they had to take the money as a direct handout.

My view is that if his ego were that sensitive, then maybe he doesn’t need the money that badly … but what do I know?