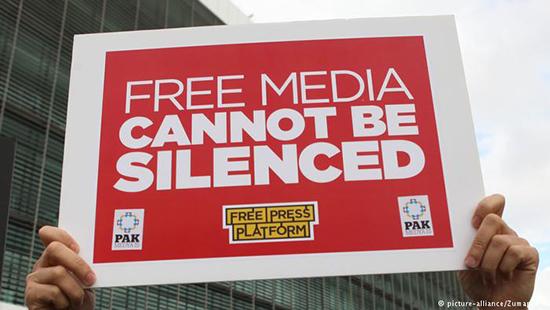 The decision to deny official press accreditation to several German journalists has drawn sharp criticism — in Berlin and in Ankara. Even a member of the president’s ruling party has expressed incomprehension.

Maria Adebahr, spokeswoman for Germany’s Foreign Ministry, didn’t hold back when voicing her criticism on Monday, calling it “incomprehensible” that three German journalists had been stripped of their accreditation in Turkey.

“We have very clearly stated our position to Turkey: We regard freedom of press as a precious asset,” she said. “German — and European — journalists must be able to work freely in Turkey. And we hope that the press accreditations will be issued shortly.”

How — and if — that can become a reality are questions that no one in Berlin is able to answer. The official stance of the Turkish authorities doesn’t leave much room for speculation.

In a short email to DW, the intelligence office in Ankara stated: “Dear members of the press. The renewal of your press accreditation for the year 2019 has not been granted.”

The refusal to issue the annual press accreditation has wide-reaching consequences. Press cards issued by Turkey expire each December and journalists need to reapply for accreditation. Not only is the accreditation, in essence, a work permit but it also usually acts as a residency permit for journalists working in Turkey.

This isn’t the first time German journalists in Turkey have run into problems. In 2016, the press office refused accreditation to Hasnain Kazim, the then-correspondent for weekly magazine Der Spiegel.  In March 2016, Kazim left Turkey. That same year, Volker Schwenck, a television journalist from another public broadcaster ARD, and a photojournalist from tabloid Bild, Giorgos Moutafis, were refused entry. Both were just passing through the country.

In 2017, the treatment of German journalists by Turkish authorities devolved into a diplomatic crisis when Deniz Yücel, a reporter from newspaper Die Welt, spent a year in an Istanbul jail without trial before eventually being allowed to return to Germany in February 2018.

In a similar case, reporter Mesale Tolu was arrested in spring 2017 and denied the right to travel until August 2018. The terrorist charges made against both journalists are still under investigation in Turkey. Cologne reporter Adil Demirci is also accused of terror links, and Turkish investigative journalist Pelin Unker, who also works for DW, was sentenced to over 13 months in jail over a Panama Papers report in January.

These instances prompted the German Foreign Ministry to release a damning report on the state of press freedom in Turkey in 2018. At around 40 pages long, the report detailed how journalists were arrested for critical reporting and “threatened with abuse while in police custody.”

Following the failed coup attempt in July 2016, about 200 media outlets in Turkey were shut down under the state of emergency decree that lasted until July 2018. Frequently, the shutdowns were justified by the media outlets having alleged ties to US-based Islamic preacher Fethullah Gulen.

Gulen, once closely associated with Turkish President Recep Tayyip Erdogan, has been labeled by the Turkish government as the “mastermind” behind the coup attempt, charges he has denied. Since then, Gulen’s followers have faced severe persecution.

Around 3,000 journalists have lost their jobs as a result of the media crackdown. “Branded as Gulenists, or sympathizers of the [outlawed] Kurdistan Workers’ Party, they have no prospect of finding work,” said the German Foreign Ministry. Many other journalists are also facing imprisonment on the basis of fabricated accusations.

About 90 percent of what remains of the Turkish media landscape can be linked to Erdogan’s ruling Justice and Development Party (AKP), either personally or financially. And the remaining 10 percent are being starved of financial support, for example by the threat of lost advertising revenue. Media that until now have taken a critical view of the government are increasingly resorting to self-censorship.

In 2018, Turkey ranked 157th out of 180 in Reporters Without Borders’ (RSF) world press freedom index, down two rankings from 2017. The latest developments come as no surprise to Christian Mihr, RSF’s managing director in Berlin since 2012.

“The fact that journalists from international media are apparently being denied accreditation is a brazen attempt to restrict independent reporting abroad,” he said. “Coming just one month before the local elections, which are crucial in Turkey, this can’t just be a bureaucratic blunder.”

There has even been criticism of the move from within Erdogan’s ruling AKP. Mustafa Yeneroglu, an AKP lawmaker in the Turkish parliament, said he could not understand the refusal of accreditation.

“I neither comprehend — nor approve — of the decision,” he said, bringing up the potential damage to Turkey’s international reputation and economic interests. “Such decisions undermine the image of our cosmopolitan country.”