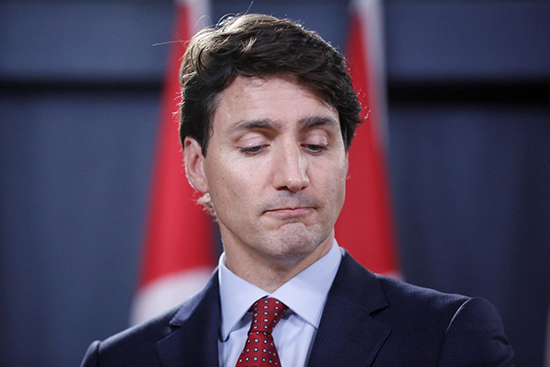 Leyland Cecco in Toronto  – The Guardian

A second minister has resigned from Justin Trudeau’s cabinet amid a deepening political scandal which is already threatening the prime minister’s prospects in this year’s federal election.

Philpott, considered a star of the Liberal party, said in a statement: “It grieves me to leave a portfolio where I was at work to deliver on an important mandate. But I must abide by my core values, my ethical responsibilities and constitutional obligations. There can be a cost to acting on one’s principles, but there is a bigger cost to abandoning them.”

A family physician who entered politics in 2015, Philpott remains a close friend of Wilson-Raybould, and was one of the few members of the Liberal party to publicly support her when she stepped down from cabinet in February. Both women were recruited by Trudeau to run as first-time parliamentarians in the 2015 election, with the two receiving top cabinet roles when Trudeau’s Liberals won a majority government.

Philpott was originally the country’s health minister, as well as overseeing the indigenous services portfolio, before she was shuffled to the role of treasury secretary earlier this month.

Late last week, Trudeau faced calls from the Conservative leader, Andrew Scheer, to resign after Wilson-Raybould said that allies of the prime minister had launched a “consistent and sustained effort” to dissuade her from prosecuting the Quebec-based engineering giant SNC Lavalin over allegations that it bribed the Libyan government.

“This is a major blow,” said Nelson Wiseman, a professor of political science at the University of Toronto, calling a ministerial resignation on principle “rare” in Canadian politics.

Trudeau told a Liberal Party rally in Toronto that he was disappointed but understood why she had left.

“Concerns of this nature must be taken seriously and I can ensure you that I am,” said Trudeau, who did not specifically address Philpott’s stated reasons for leaving. He also thanked her for serving in his Cabinet – something he notably did not do when Wilson-Raybould quit.

“In a democracy like ours, in a space where we value our diversity so strongly, we are allowed to have disagreements and debate. We even encourage it.”

After Philpott’s resignation, Wilson-Raybould praised her for her “constant and unassailable commitment to always doing what is right and best for Canadians.”

On Monday, Trudeau said he is continuing to assess whether Wilson-Raybould, who has said she will run again as Liberal, has a future within the party.

In her statement, Philpott said the SNC Lavalin scandal had “raised serious concerns” following Wilson-Raybould’s testimony over the extent to which those close to Trudeau – and the prime minister himself – sought to pressure her to abandon the prosecution.

“The solemn principles at stake are the independence and integrity of our justice system. It is a fundamental doctrine of the rule of law that our attorney general should not be subjected to political pressure or interference regarding the exercise of her prosecutorial discretion in criminal cases. Sadly, I have lost confidence in how the government has dealt with this matter and in how it has responded to the issues raised,” she said.

Scheer, the Conservative leader, tweeted on Monday that Philpott’s resignation “clearly demonstrates a government in total chaos, led by a disgraced prime minister consumed with scandal”.

Philpott’s resignation marks a fresh blow to the Trudeau government, which had hoped to shift focus from the scandal on Monday with a set of announcements on plans to combat climate change.

A poll released on Sunday found the scandal continues to inflict damage on the Trudeau government, with nearly 25% of Canadians saying it will change the way they vote in the October election.