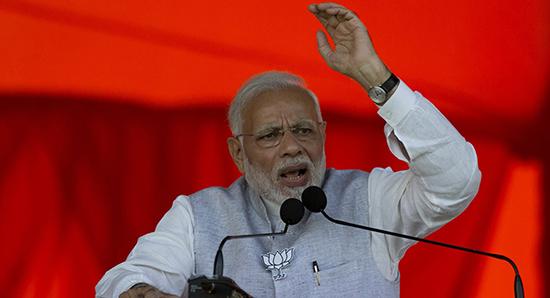 Tensions between Pakistan and India have been running high since the Pakistan Air Force brought down an Indian MiG-21 and captured its pilot. The downing followed shortly after the Indian Air Force launched an assault on an alleged terrorist training base in Pakistan.

Indian Prime Minister Narendra Modi warned on Monday that the 26 February airstrike on a purported Jaish-e Mohammad camp in Balakot in Pakistan-administered Kashmir won’t be New Delhi’s last action against terrorism on its neigbour’s territory.

“If one work gets over, our government doesn’t sleep, but gets ready for another. We won’t lag behind when it comes to taking big and bitter decisions. Even if they [terrorists] hide in the bowels of the Earth, it is our principle to kill them by barging into their houses”, Modi told the crowd, according to local media.

Modi’s comments came the same day that news agency ANI reported an Indian Sukhoi 30MKL fighter jet had shot down a Pakistani unmanned aerial vehicle (UAV), which had entered Indian airspace at around 11:30 am (6:30 UTC). The debris from the drone reportedly fell on the Pakistani side of the border.

The tensions between India and Pakistan flared up late February when the Indian Air Force conducted an air raid against the suspected Jaish-e Mohammad camp in Pakistan. The operation came in retaliation for a deadly suicide attack claimed by the Pakistan-based terrorist group on an Indian paramilitary police convoy in the disputed Kashmir region on 14 February.

The following day Islamabad announced it had shot down two Indian warplanes over the Kashmir border and captured Indian pilot Abhinandan Varthaman, who was released several days later.

The Indian Air Force, for its part, said that one of its MiG-21 Bisons jets had downed a Pakistani F-16 during the air combat. While the loss of the Indian MiG-21 has been officially confirmed, Pakistan has strongly denied reports that its US-made fighter jet was shot down or ever scrambled.