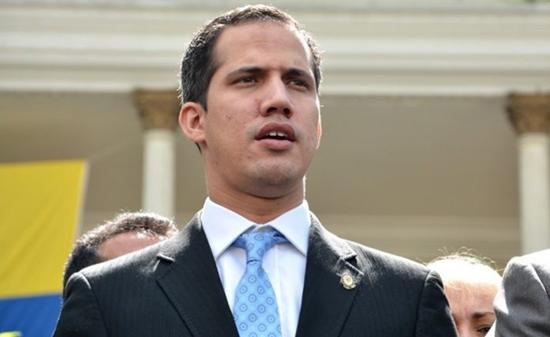 Venezuela’s opposition figure Juan Guaido has returned to the country, facing arrest for violating a travel ban that had been imposed on him by the Supreme Court.

Guido arrived at the Caracas airport on a commercial flight from Panama City on Monday.

At the airport, he addressed a crowd of his supporters and some European envoys.

Guaido, who heads the defunct National Assembly, plunged the country into political turmoil in January when he suddenly declared himself “interim president,” disputing the outcome of the May 2018 election, which President Nicolas Maduro won. He has been accusing Maduro of “usurping power” and calling on him to step down.

The news of Guaido’s return raised speculations that he might be arrested over violating the travel ban imposed in late January by the Supreme Court for his role in “serious crimes that threaten the constitutional order.”

He crossed the border into Colombia on February 22 to attend a music festival on the Tienditas Bridge. Guaido, who was transported by helicopter to the bridge, claimed he was helped by the military to defy the ban. The military, however, has largely remained loyal to Maduro.

The Venezuelan government seems to have been exercising patience with Guaido so far. Maduro, who slams Guaido as a “US puppet,” has called on him to “think well about what he is doing” and return to the negotiating table.

The opposition figure, who was aware of the risk of arrest by authorities, earlier called on his supporters to take to the streets to protect him from getting arrested on arrival in Caracas. But there were no security forces beyond the usual personnel at the airport when he did arrive.

US National Security Adviser John Bolton has claimed that any threat to Guaido “will be met with a strong and significant response from the United States and the international community.” Bolton is known to have lobbied for certain individuals and groups — including terrorist outfits — in return for fees.

Despite attempts to discredit Maduro by the administration that Bolton works for, the United Nations continues to recognize the elected government in Venezuela.

Maduro has repeatedly accused Washington of openly pushing for a coup in the oil-rich country. The US has also imposed economic sanctions on Venezuela and has confiscated state oil assets based in the US to channel them to Guaido.

Guaido has also posted a tweet, calling on his supporters to pour out into the streets on Saturday. “I call on the country to mobilize again this Saturday #9Mar. All the support we have received and the backing we need will depend on us being on the streets.”

Meanwhile, an envoy appointed by Guaido to the US says the opposition figure has named a representative to the Inter-American Development Bank (IADB), which supports Latin America and the Caribbean economic development.

The Washington-based lender said it had received a letter from Guaido naming Harvard University economist Ricardo Hausmann as the representative of Venezuela to the IADB.

“We’ve received the letter and are determining next steps,” a bank official told Reuters.

If the institution accepts Guaido’s reprehensive, it will be the first financial institution to make such a move.

But under the IADB charter, the lender’s board is prevented from discussing internal political issue of member states.